To protect Merkel after the coming (planned) collapse of the financial system, in close cooperation with Germany’s special forces Kommando Spezialkräfte (KSK).

Elite puppet Merkel is destroying Germany on the orders of TPTB (…, just like Adolf Hitler). 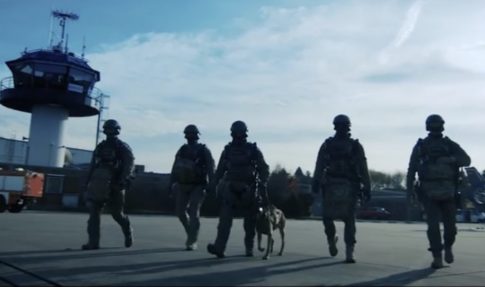 The increasing terror threat faced by Europe has led to German plans to increase the size of their anti-terror Federal Police unit by a third and open a second base, likely close to Berlin.

GSG9 as they are known, are having to expand to combat the huge growing Islamist threat. Commander Jerome Fuchs told German radio that it was vital they beefed up their presence in the capital, insisting: “If you look at similar terrorist situations across Europe, then the capitals were often affected, and we definitely have to get better in the capital, and the goal is clear: a quick GSG9 responsiveness in the capital.”

Angela Merkel’s open door madness has seen prosecutor’s overwhelmed with terror cases, whilst a German court recently stopped the deportation of a convicted jihadi to Turkey because they are worried about his human rights.

With terror attack after terror attack, it is clear that Europe is at war with radical Islam. German authorities are quite literally having to beef up their anti-terror brigade. A Europe of strong borders rather that free movement would make citizens far safer.