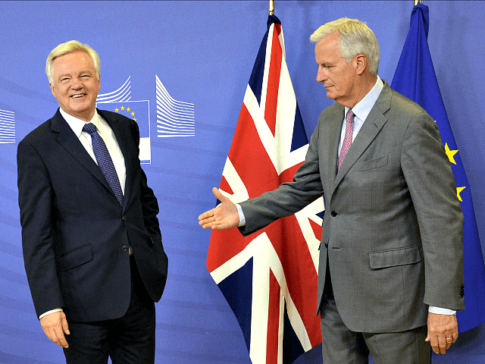 A new study has calculated a ‘No Deal’ Brexit would cost the EU some £507 billion, while the UK reaps a £641 billion windfall.

Cardiff University’s Professor Patrick Minford argues that, for the United Kingdom, “a breakdown would be a short-term nuisance but a substantial economic gain [over the longer term]”.

For the EU, on the other hand, ‘No Deal’ is “both a short-term nuisance and a substantial economic loss [over the longer term]”.

The economist explains that Britain’s exit from the EU Customs Union would cost the European Union “two years’ worth of the terms of trade gain its producers make on its balance of trade surplus with the UK, estimated at around £18 billion a year”, with two years’ worth of that equating to a “£36 billion one-off loss”.

Britain, on the other hand, would enjoy a “one-off gain” of £38 billion in savings on its EU budget contribution, and a £180 billion windfall from the “long-term gain” represented by “free trade, own-regulation and own-border-control”.

He also suggests that, as the balance of trade currently favours the EU, the UK would gain a total of £433 billion tariff revenue from EU exporters.

Despite much of the establishment media having appeared to buy into the narrative that Brussels holds all the cards in the Brexit talks and the United Kingdom is at its mercy, evidence is mounting that EU leaders are not unaware of the danger they face if a deal with Britain is not struck.

The European Commission has already suggested that regional aid for Germany and France will have to be discontinued if Britain’s budget contributions cannot be made up elsewhere, and Germany, in particular, faces a 3.8 billion euro hole in its finances.

Hungary’s foreign minister has also warned that the bloc faces a “nightmare scenario” in the event of ‘No Deal’.

“If there’s no deal, if there’s no comprehensive economic, trade and investment agreement, then we will be in big trouble in Europe, because the last time we were able to implement a free trade agreement was in 2011 with [South] Korea,” he told the BBC in 2017.

“So, if this is the case, then it will harm our competitiveness, harm the competitiveness of Europeans furthermore … we want the most comprehensive economic trade and investment partnership with the UK in the future.”