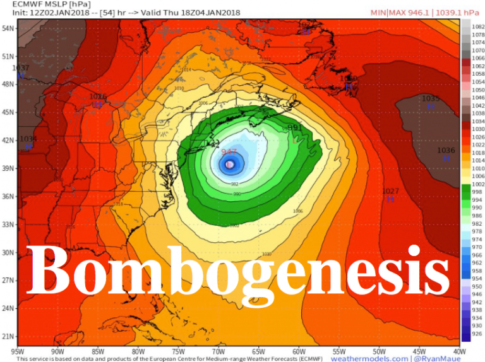 – A “Bomb Cyclone” Is Set To Detonate Off The East Coast:

“This storm developing off the Southeast coast will meet the meteorological criteria of a “bomb” as it rapidly intensifies. The signal for a storm has been evident since last week, but as the track has been fine-tuned, impacts to the I-95 corridor are now expected. Snow, strong winds, and very cold temperatures are expected particularly the further east one heads,” said Ed Vallee, meteorologist at Vallee Weather Consulting LLC.

Winter Storm Grayson, a very large and powerful winter storm is threatening the East Coast of the United States with heavy snow, intense winds, and record-setting low temperatures. Winter storm watches and warnings have been issued for many coastal regions in north Florida to Maine from Wednesday into late Thursday.

This week’s storm may end up being worse than your average nor’easter, according to Bloomberg. It could produce a “bomb cyclone,” otherwise known as a bombogenesis, a phenomenon that occurs when a system’s central pressure drops steeply – 24 millibars or more – in 24 hours. If current computer models hold, that’ll start to happen somewhere off Cape Hatteras, North Carolina, and continue as the storm moves north. Hurricane-force wind warnings have been posted off the coast where ships could encounter winds of 80 miles (130 kilometers) an hour and waves as high as 26 feet on Thursday.

“The real apex, the peak of the storm, will be Cape Cod to Nova Scotia,” said Gregg Gallina, a forecaster at the U.S. Weather Prediction Center in College Park, Maryland.