Hundreds took to the streets in the southern Swedish town of Malmo this week to protest the government’s response to a three brutal gang rapes of teenage girls over a three week period – the most recent of which took place in a playground last Saturday and left a 17-year-old girl hospitalized.

Authorities haven’t disclosed the identity of the suspect(s) and have offered scant details of the attack – though it has been described by authorities as particularly brutal, with unconfirmed reports on social media claiming the victim had lighter fluid poured in her vagina and set on fire.

“We have been policemen for a long time, several of us, I have been working for 35 years, and we have not had such a thing before. You’ve really crossed a border, it’s a very unusual treatment, says Inner Police Commander Mats Attin to SVT News Skene. –SVT (translated)

Attin adds that the 17-year-old victim was exposed to a “special ruthlessness,” during the violent encounter, however he did not go into further detail. “We have received information from the public that we find very interesting. This is a horrendous crime,” said Anders Nilsson who is leading the preliminary investigation.

Gang rapes were virtually unknown to Sweden before 1995, and rapidly rose with the tide of primarily Islamic asylum seekers from third world countries. In 2008, Sweden’s Crime Prevention Council published a report on rape against people over the age of 15, which concluded “rapes with several perpetrators” (gang rapes) have increased sharply since the mid-90’s. In 1995, there were 116 reported gang rapes in Sweden. In 2006, that had jumped to 553 – an increase of nearly 500% over ten years.

Could it have something to do with immigration? 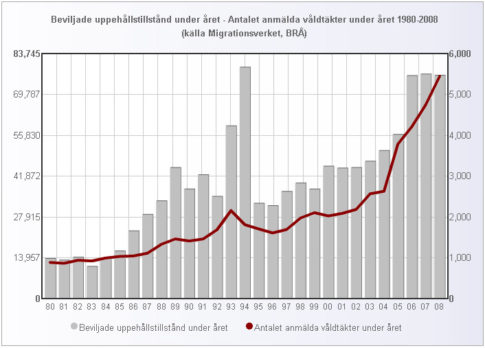 One of the worst cases occurred in 2012, wries Swedish journalist Ingrid Carlqvist for the Gatestone Institute, when a 30-year old woman was raped by eight men in a housing project for asylum seekers, in the small town of Mariannelund. The woman was an acquaintance of a man from Afghanistan who had lived in Sweden for a number of years. He invited her to go out with him. She obliged. The Afghan man took her to a refugee housing project and left her defenseless. During the night, she was raped repeatedly by the asylum seekers and when her “friend” returned, he raped her too. The following morning she managed to call the police. Sweden’s public prosecutor has called the incident “the worst crime of rape in Swedish criminal history.”

Sweden’s legal system uses the same mental gymnastics, apparently. In a 2013 incident which occurred in the Stockholm suburb of Tensta, a 15-year-old girl was locked up while six migrants gang raped her. The lower court convicted the six men but the court of appeals acquitted them because no violence had occurred, and because the court determined that the girl “had not been in a defenseless position.”

How many Swedish women and girls need to be victimized in schoolyards and public pools before Swedish authorities wake up? No wonder the country is now known as the “rape capital” of Europe…