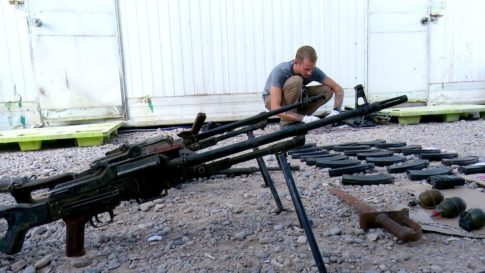 – The Ultimate In Irony: Syrian Army Rolls Into Idlib With US Weapons Captured From ISIS:

Authored by Leith Fadel and Andrew Illingworth of Al-Masdar News,

The Syrian Arab Army’s (SAA) Tiger Forces arrived in northern Hama this week with a big surprise from their previous operations in the Deir Ezzor Governorate. Units from the Tiger Forces were seen armed with US-manufactured weapons that were seized from the Islamic State (ISIS) during the two month long battle in Deir Ezzor.

According to a military source in Hama, the Syrian Army’s Tiger Forces are planning to use the US-manufactured weapons against the jihadist rebels in the upcoming battle for the Idlib Governorate. Among the US-manufactured weapons transferred to the Idlib front were a large number of TOW missiles that were previously supplied by Washington to the rebel forces in Syria before they were later sold to the Islamic State.

The rapid defeat of Islamic State forces in eastern Syria over the last several months has seen the Syrian Arab Army capture untold quantities of military equipment from the terrorist group, most of which will likely go into the raising of new pro-government formations. As Syrian pro-government forces chased ISIS out of its main strongholds along the western shore of Euphrates River, the jihadist faction never had the time to re-locate its weapons stockpiles. The inevitable result of this was that such stockpiles came into the possession of the Syrian Army.

Despite the fact that some Western-made weapon systems (particularly artillery and anti-tank missiles) were found, by far most of the equipment is of Soviet design (the CIA/Pentagon program to arm anti-Assad militants shipped mostly Soviet arms via Eastern Europe to US-backed groups). This means that the Syrian Army, itself possessing Soviet-made/Russian weapons, has compatible ammunition and spare parts to maintain the captured weapons and thus has the ability to press them into service.

Utilizing this huge captured arsenal, it is expected that the Syrian Army will raise new formations, not only within its own service, but also within pro-government militias – namely the National Defense Forces. In addition to raising new units of local fighters whose job it is to protect recently liberated territories throughout the provinces of Homs, Hama and Deir Ezzor, the army’s 5th Assault Corps formation is also predicted to expand.

To this end, the sheer amount of arms captured from ISIS ensures that many thousands of fresh recruits can be quickly provided with assault rifles and rocket launchers as well as the fire support assets their new units will require.