The first good thing I hear coming from Macron and probably also the last.

Info on the detrimental health effects of mobile hones and Wi-Fi HERE. 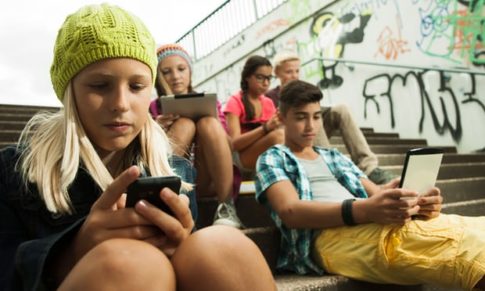 – France to ban mobile phones in schools from September:

Pupils, teachers and parents seem less than convinced by measure prohibiting use in primary, junior and middle schools

The French government is to ban students from using mobile phones in the country’s primary, junior and middle schools.

Children will be allowed to bring their phones to school, but not allowed to get them out at any time until they leave, even during breaks.

Jean-Michel Blanquer, the French education minister, said the measure would come into effect from the start of the next school year in September 2018. It will apply to all pupils from the time they start school at age of six – up to about 15 when they start secondary school.

“Sometimes you need a mobile for teaching reasons … for urgent situations, but their use has to be somehow controlled,” he told RTL radio.

The minister said the ban was also a “public health message to families”, adding: “It’s good that children are not too often, or even at all, in front of a screen before the age of seven.”

The French headteachers’ union was skeptical that the ban could be enforced.

“This new announcement from the [education] ministry leaves us dubious because we’re having trouble understanding what is the real issue here. In general, we’re used to them being logical and pragmatic about things, and here, we can’t find the logic or the pragmatism in the announcements,” said Philippe Vincent, the union’s deputy general secretary.

Outside one middle school in the centre of Paris, pupils asked about the measure seemed unimpressed. “I don’t understand how it will work. Who will take the phones, where will they put them … how will we get them back?” said one 13-year-old boy.

At another school, Mathilde, 12, said: “It’s ridiculous. At my school, we don’t use them in class or during recess, so what’s the problem? If anyone’s caught using one in the toilets or at lunchtime, the phones are confiscated immediately and the person is given detention.”

Parents seemed uncertain too. “It’s probably a good idea when the kids are in school, but they can’t ban them bringing them to school,” said Sabine. “My daughter goes to school and comes home on her own, and at this time of year it’s dark so early, so I want her to have a phone with her. It’s reassuring.”

She added: “But rather than a ban, wouldn’t it be better to install a signal blocker in schools?”

Blanquer has already suggested schools could install lockers for phones, though many city centre schools have little room for them.

“Are we going to transform a school into a giant locker?” said Vincent. “I’ve done a little calculation myself: 5,300 state schools with an average 500 pupils each, that makes around 3 million lockers.”

“How is the school going to stock them? And how are they going to make sure they’re given back to the owner at the end of school?” Gérard Pommier, head of the Federation of Parents in State Schools.

Education officials are now studying how the mobile ban can be put into effect.

“In ministerial meetings, we leave our phones in lockers before going in. It seems to me that this as doable for any human group, including a class,” Blanquer said in September.

The minister has also supported the introduction of school uniforms, but has said he is opposed to the measure being obligatory throughout the country.

He has also announced that each school must set up a choir before January 2019. Le Parisien newspaper said the government had set aside €20m for the measure. Government officials said joining the choir would be voluntary and a “complement to obligatory music lessons” that exist already