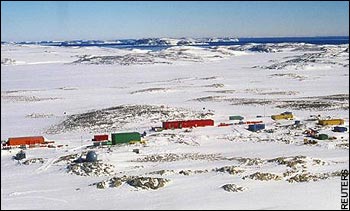 Refugees could move to the Antarctica due to rising global temperatures

Climate change will force refugees to move to Antarctica by 2030, researchers have predicted.

Among future scenarios are the Olympics being held in cyberspace and central Australia being abandoned, according to the think tank report.

Forum for the Future, a research body committed to sustainable development, said they wanted to stir debate about how to avert the worst effects of global warming by presenting a radical set of ‘possible futures’.

There will be a shift towards greater energy efficiency, where desalination plants will run on solar power will turn the Sahara green.

Refugees are expected to move to Antarctica because of the rising temperatures that will see the population of the continent increase to 3.5 million people by 2040.

As the world fails to act on climate change, researchers predict that global trade will collapse as oil prices break through $400 a barrel and electrical appliances will get automatically turned off when households exceed energy quotas.

Peter Madden, head of the Forum, said: “We still have the chance to alter the future. This is what the world could be like and some of these options are not very pleasant.”

Australia and Oklahoma will be abandoned because of water shortages and athletes will stay at home in the world’s first virtual Olympics, competing against each other in virtual space with billions of spectators.

The climate study envisages a shift to a service based economy, people no longer owning cars but using bicycles and the eastern seaboard of the United States being protected by an eco-concrete wall that generates power from waves and tidal surges.

Mr Madden said that most reports about climate change focused on scientific findings about carbon dioxide emissions, mainly from burning fossil fuels, without taking account of psychological or social responses.

“Historians of the future may look back on these as the ‘climate change years’,” he said. “They will either look back on our generation as heroes or view us with incomprehension and disgust – as now we look back on those who allowed slavery.”

He said the crystal ball survey did not seek to project what was most likely to happen, just some of the possibilities.