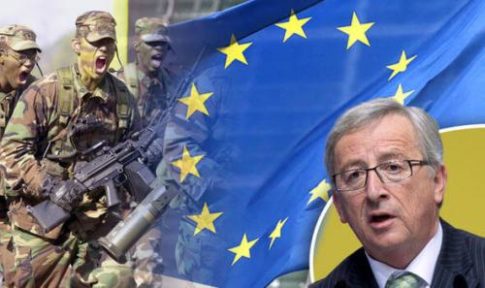 EU leaders formerly endorsed the harmless sounding Permanent Structured Cooperation, or PESCO, pact on Thursday evening in Brussels. After the shock of Brexit, the goal of defence integration was revived by former military foes, Germany and France, supported by Italy and Spain, in a show of EU unity. A similar proposal was blocked by the French parliament in the 1950s (see below). Now a treaty has been signed which sees the defence union complete by 2025 in what has been described as “one of the most tangible steps in EU integration since Brexit”.

Britain, thanks to Brexit, Malta and Denmark, which has an “opt out” on EU defence issues did not sign the agreement. Standing in the front row on the left of the group photo was the President of the undemocratic European Commission, Jean Claude Juncker, who has been calling for an EU army for many years. In 2015, The Guardian reported.

The European Union needs its own army to help address the problem that it is not “taken entirely seriously” as an international force, the president of the European commission has said. Jean-Claude Juncker said such a move would help the EU to persuade Russia that it was serious about defending its values in the face of the threat posed by Moscow. “You would not create a European army to use it immediately,” Juncker told the Welt am Sonntag newspaper in Germany in an interview published on Sunday.

Back then, it was really just about furthering the European project, especially as the need for an EU army in parallel to NATO has never been adequately explained. This was Reuters commenting on the new defence pact.

European Union nations are set to achieve a 70-year-old ambition to integrate their defenses on Thursday, signing a pact between 25 EU governments to fund, develop and deploy armed forces together after Britain’s decision to quit the bloc. France’s President Emmanuel Macron said “concrete progress” had been made, and Dutch Prime Minister Mark Rutte said the pact would make the EU more agile abroad. “This is not about replacing NATO, it is about being more flexible and using our resources better,” Rutte told reporters.

Hmmm. Meanwhile, the Reuters article has a stab at making a coherent case based on more recent events.

A bigger impetus came from failings in the 1990s, when EU governments were unable to act in the Balkan wars and relied on U.S.-led NATO to stop the bloodshed on their doorstep. In Libya in 2011, a Franco-British air campaign ran out of munitions and equipment and was again forced to turn to the United States, in what is considered an enduring embarrassment for the European Union, a major economic power.

Which sounds more like justification for NATO rather than an EU defence force. Talking of which, NATO’s secretary-general, Jens Stoltenberg, who attended part of the summit, warned against duplication with NATO since 22 EU countries are also NATO members.

“There has to be coherence between the capability developments of NATO and the European Union. We cannot risk ending up with conflicting requirements from the EU and from NATO to the same nations,” he told reporters. “Forces and capabilities developed under EU initiatives also have to be available for NATO because we only have one set of forces,” Stoltenberg said.

Not surprisingly, the announcement was greeted with some bravado from “rough tough” EU bureaucrats, like European Council President, Donald Tusk, who said it was “bad news for our enemies”. According to Tusk.

“More than half a century ago, an ambitious vision of the European Defence Community was created but what was missing was the unity and courage to put it into practice,” Tusk, who chairs EU summits, said of the failed 1950s attempt. “The dream was at odds with reality. Today this dream becomes reality,” he said in a speech in front of EU leaders and military personnel from each of the 25 countries involved.

“It’s sad that we needed Donald Trump to give us a boost, but whatever, it is the right outcome,” said former German foreign minister Joschka Fischer, who as minister backed NATO’s intervention in Kosovo in 1999 but opposed the 2003 Iraq war.

Reuters reported the irony noted by EU diplomats that UK Prime Minister, Theresa May, wants Britain to join the agreement despite leaving the EU. We had thought Theresa May meant it when she said “Brexit means Brexit”, but apparently not (quite).

“We do face a number of threats across Europe,” May said. “I‘m very clear that although the British people took a sovereign decision to leave the EU, that does not mean that we were going to be leaving our responsibilities in terms of European security,” she told reporters.

Why she would want Britain to be part of a defence force controlled by an unelected bureaucrat of the calibre of Jean Claude Juncker is a mystery (to us anyway). Speaking last month before the treaty was signed, former UKIP leader Nigel Farage argued.

The pact means a European army, navy, air force. They are already establishing their own command centre in Brussels. “They’ve got the fund, the structures set up for all of it. Already they are divvying up which country will do the helicopter work, which country will be the major naval provider. All of that is happening right now.

Mr Farage…(took the) chance to also take a dig at European Commission President Jean Claude Juncker – a key proponent of a new “functioning European defence union”. Mr Farage said: “I sat there in September – baring in mind I have seat number 20 in the European Parliament, my friend Jean-Claude Juncker is seat number 21 so I was the closest elected official to him – when he gave that speech. I thought to myself “thank goodness we are leaving!” because we are not going to be part of these European military structures any more.”

1 thought on “Who Ya Gonna Fight? Landmark Treaty Signed To Create EU Army”