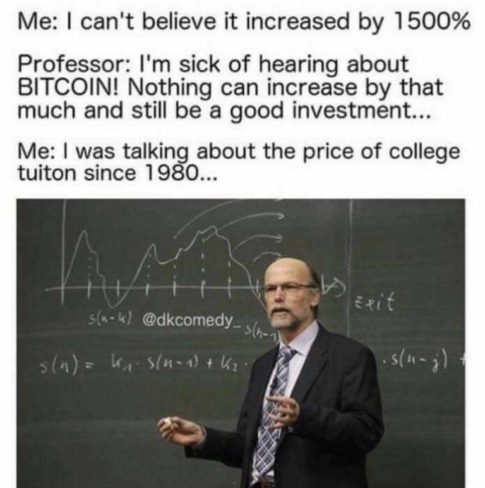 – It’s Time to Rethink Education – Part 3 (The Future of College):

Over the next ten years, I suspect the concept of a college education will be questioned to such an extent, and by so many people, that all assumptions we currently hold dear will be discarded. The spark for this momentous shift will start, as is so often the case, with simple economics. Too many young people have taken on too much debt to get jobs that didn’t require this education they were told they needed. We quite literally have an entire generation that understands this intimately, and this understanding will shape the way they see college, and education in general, as they raise kids of their own.

As I write this, I’m excited to say we live in one of the most extraordinary times in human history. The old way of doing things in virtually every aspect of human civilization has either broken down, or is breaking down as I write this. Communications, media, finance, money itself, etc. The list is seemingly endless, and education is no exception. In fact, I think education is an example of extremely low-hanging fruit and will be disrupted and decentralized in unimaginable ways in the years ahead.

If it was just a function of student debt, the changes in how human education functions going forward wouldn’t be as extreme as I expect. As I mentioned earlier, the problem of widespread debt serfdom is merely a catalyst for the paradigm level change I foresee. As younger generations who grew up with the internet start to question how schooling works, from kindergarten to grad school, it’ll become very apparent how archaic and stifling our current methods really are. I already highlighted many examples of this in Parts 1 and 2, so I’m not going to repeat myself. Today’s post will center around the concept of college, and whether or not people will perceive it as a useful experience in the decades to come. I suspect not.

As it stands today, there are two main reasons everyone thinks you need to go to college. First, many employers (ridiculously) require a college degree to get a job. Second, it’s become a societal norm and rite of passage. There’s tremendous peer pressure to go to college so you’re not the person who gets condescending looks at the party when you sheepishly confess that you didn’t. In other words, we’ve created an irrational expectation for a college degree driven by the desire to attain specific employment and social opportunities. As such, all it will really take to end this ritual of going to college is a society wide mindset shift. These sorts of things can happen, and I fully expect this one will.

One contemporary example of how this sort of thing can take root can be seen in the burgeoning Bitcoin and crypto asset economy. This has been the most lucrative and dynamic spaces to work in over the past couple of years, and no one in it really cares what college you went to, or if you went at all. What matters at the end of the day is talent, and if you’re a talented programer you’ll find your spot. After all, we don’t even know who Satoshi Nakamoto is and it doesn’t matter. What matters is the code and it’s ability to fundamentally change the world. I think this the mindset of the future, where dominator hierarchies are replaced by merit based hierarchies (holarchies).

As Ken Wilber described (this will sound like gibberish unless you’ve read my work around Spiral Dynamics):

That lessening of green’s pervasive hostility and vindictiveness toward all previous stages of development is what we identied as “step one” in the requisite self-healing of green. There is at least a decent likelihood that this will—and to some degree already has—begun to happen. On the other hand, “step two”—the realization that growth holarchies provide the actual basis of the value judgments that green is already making, and that these growth holarchies also are the only truly effective means to displace the dominator hierarchies that green correctly ranks on the bottom of the list of social desirables—is a bit less likely to occur at the green level itself, but will most likely depend upon the transformation to integral 2nd tier. My strong suspicion, therefore, is that green will perform a good deal of step one on its own, and that this will have a very positive effect on culture at large. (And conversely, to the extent that at least this first step is not taken, then the self-corrective drive of evolution will continue to push, and push, and push into existing affairs, driving more Trump-like “disasters” as evolution redoubles its efforts to force its way through these recalcitrant obstructions.)

Many people reading this will say that what’s happening with Bitcoin and crypto assets is just an exception. Others will proclaim that it’s all just a tulip bubble anyway, and things will go back to the way they were after it pops. I completely disagree. Whether Bitcoin conquers the world or not time will tell, but the ethos it represents about the world (decentralization) isn’t going anywhere.

What was the right choice for an extremely bright young person over the last 5 years.
Go to college or work on Bitcoin?
This will be increasingly common going forward.

Moreover, as I explained in yesterday’s post, my wife and I are seriously considering unschooling. I’m not just blowing smoke on this, I’m looking at potentially putting my money where my mouth is.

Not only that, but it’s increasingly clear to me that the college experience is in many ways making people dumber. To prove this point, I highly recommend everyone read an extremely important article written by two former professors at Evergreen college, Bret Weinstein and his wife Heather Heying, titled: Bonfire of the Academies: Two Professors on How Leftist Intolerance is Killing Higher Education.

At colleges and universities all over the country, students are protesting in increasingly virulent and sometimes violent ways. They demand safe spaces and trigger warnings, shouting down those with whom they disagree. It has become rote for outsiders to claim that the inmates are running the asylum; that this is analogous to Mao’s Red Guard, Germany’s brown shirts, the French Revolution’s Jacobins; and, when those being attacked are politically “left” themselves, that the Left is eating its own. These stories seem to validate every fantasy the Right ever had about the Left.

As two professors who recently resigned from positions at a college we loved, and who have always been on the progressive-left end of the political spectrum, we can say that, while none of those characterizations is exactly right, there is truth in each of them…

In 2015, Evergreen hired a new president. Trained as a sociologist, George Bridges did two things upon arrival. First, he hired an old friend to talk one-on-one to members of our community — faculty, staff, and students. We talked about our values and our visions for the college. But the benefit of hindsight suggests that he was looking for something else. He was mapping us, assessing our differences, our blind spots, and the social tensions that ran beneath the surface. Second, Bridges fired the provost, Michael Zimmerman. The provost, usually synonymous with the vice president for academics, is the chief academic officer at an institution of higher education. Zimmerman would have disapproved of what Bridges had in mind and would have had some power to stop it. But he was replaced by a timid (though well-liked) insider who became a pawn due to his compromised interim status and his desire not to make waves.

Having mapped the faculty and fired the provost, Bridges began reworking the college in earnest. Surprise announcements became the norm as opportunities for discussion dwindled.

The president took aim at what made Evergreen unique, such as full-time programs. He fattened the administration, creating expensive vice president positions at an unprecedented rate, while budgets tightened elsewhere due to drops in student enrollment and disappearing state dollars. He went after Evergreen’s unparalleled faculty autonomy, which was essential to the unique teaching done by the best professors.

All of this should have been alarming to a faculty in which professors have traditionally viewed administrative interference in academic matters with great suspicion. But Bridges was strategic and forged an alliance with factions known to be obsessed with race. He draped the “equity” banner around everything he did. Advocating that Evergreen embrace itself as a “College of Social Justice,” he argued that faculty autonomy unjustly puts the focus on teachers rather than students, and that the new VP for Equity and Inclusion would help us serve our underserved populations. But no discussion was allowed of students who did not meet the narrow criteria of being “underserved.” Because of the wrapping, concerns about policy changes were dismissed as “anti-equity.” What was in the nicely wrapped box turned out to be something else entirely.

Imagine being a parent who spent years of savings to send their child to Evergreen. Irate wouldn’t even begin to describe it.

In the decades to come, the people who will increasingly shape our world probably won’t have a college degree at all — and that’s probably a good thing.