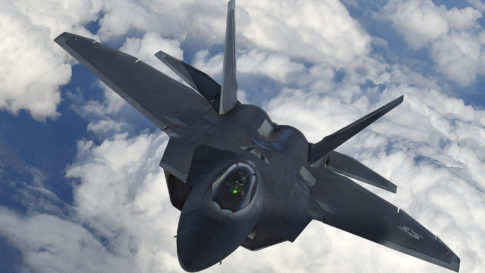 – US F-22s Fire Warning Flares At Russian Su-25 Jets In Near Incident Over Syria:

On Saturday, the Russian Defense Ministry reported an “Incident” had taken place involving a USAF F-22 over Syria which according to the Russians “actively prevented the Russian pair of Su-25 attack aircraft from carrying out a combat mission to destroy the Daesh stronghold in the suburbs of the city of Mayadin in the airspace over the western bank of the Euphrates River on November 23” with the The F-22 firing off heat flares and released brake shields with “permanent maneuvering, imitating an air battle” to which we said that in the apparent eagerness by the US to re-engage Russia, it is likely that more such near-incidents will take place.

As the Washington Examiner adds, the aerial encounter occurred when the Russian jets strayed into airspace east of the Euphrates River, putting them on the wrong side of a “deconfliction zone” established between Moscow and Washington to avoid confrontation in the skies over Syria.

“Two F-22 went too close to two Russian jets so we had to use the de-confliction channels,” the official stated on Thursday. “This is not something extraordinary… It happens sometimes several times a day.”

The Russian jets immediately left the area after the intercept and warning flares from the F-22s, an official confirmed to the Washington Examiner. Meanwhile, the Pentagon could not provide an account of how many or how often Russian violations of the deconfliction zone occur.

So far, neither Russian, nor US military officials commented on the issue, although the fact that there have been two near-combat incidents in the span of a week, virtually assures that it is only a matter of time before the “worst case” scenario becomes reality, and a dogfight between US and Russian fighter planes ends in tragedy.

The Russian Defense Ministry has said that an F-22 got close to a pair of Su-25 jets, hampering them from escorting a humanitarian aid convoy. It dismissed reports of the Russian jets being “intercepted.”
The incident took place Wednesday in the vicinity of the Syrian town of Mayadin, when a pair of Su-25 close air support jets were escorting a humanitarian aid convoy, the Russian Defense Ministry said. A US F-22 stealth fighter came from across the Euphrates river and approached the aircraft, firing flare decoys in front of them.

A Su-35 fighter jet, which provided cover for the Russian planes, “rapidly approached” the F-22 from the rear and the US warplane left the area afterward, the ministry added.

The ministry stressed that the incident occurred above the western bank of the Euphrates River, dismissing media reports that the Russian planes were allegedly operating over the eastern bank.

Earlier, US military officials told media, that a F-22 fighter fired flares to warn Russian planes away from a “deconfliction line” in Syria. After the encounter, the Russian planes reportedly left the area.

“Two F-22s went too close to two Russian jets so we had to use the de-confliction channels,” a US Central Command (CENTCOM) told Sputnik on Thursday. “This is not something extraordinary… It happens sometimes several times a day.” The official has also confirmed that the militaries of the two countries have discussed the incident.

Moscow and Washington agreed on a flight safety memorandum in Syria in 2015 and established a hotline to prevent emergency situations. Using this early-warning system, the militaries of the two countries discuss the approximate locations and missions of their planes to avoid them being in the same airspace at the same time.

However, the two sides have repeatedly accused each other of disregarding the memorandum and being reluctant to use the tools at their disposal to prevent incidents. A similar incident between the Russian and US militaries was reported by Russia’s Defense Ministry last week. It said that a Russian Su-35 was forced to chase away a rogue US F-22 jet on November 23.