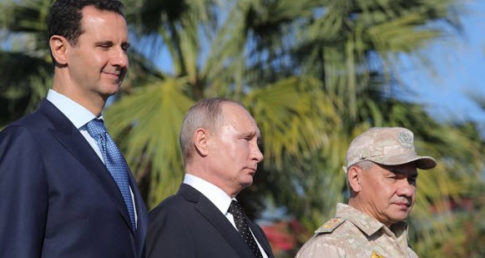 Is the US really a superpower or just the biggest collection of stupidity on the planet?

Washington has already lost the Syrian war once. Now it is about to lose it a second time.

A few days ago the president of Russia, Vladimir Putin, declared a “complete victory” in Syria:

“Two hours ago, the (Russian) defense minister reported to me that the operations on the eastern and western banks of the Euphrates have been completed with the total rout of the terrorists.”

The Iranian commander of the forces which support the Syrian and Iraqi governments sent a note to the U.S. to let Washington know that any remaining U.S. forces in Syria will be fought down:

“The commander of the Iranian Revolutionary Guards Corp Brigadier General Haj Qassem Soleimani sent a verbal letter, via Russia, to the head of the US forces commander in Syria, advising him to pull out all US forces to the last soldier ‘or the doors of hell will open up.’”

“My message to the US military command: when the battle against ISIS (the Islamic State group) will end, no American soldier will be tolerated in Syria. I advise you to leave by your own will or you will be forced to it.”

According to reports, Russia has confirmed that Iran will stay in Syria as long as Syrian President Assad, who insists on liberating all of Syria without exception for the Americans, decides. Washington’s plan to occupy a corner of Syria and revive ISIS is dead in the water, as will be all US troops sacrificed to this purpose.

According to reports, CIA director Mike Pompeo sent a letter to Soleimani expressing his concern about Iran’s intention to attack American interests, declaring Washington “will hold Soleimani and Iran accountable for any attack.”

According to reports the CIA’s letter had no effect and was treated with total contempt:

“Mohammad Mohammadi Golpayegani, a senior aid to the Grand Ayatollah Ali Khamenei confirmed Pompeo’s attempt to send a letter but said  ‘Soleimani refused to read it or to take it because he has nothing further to add.’

Sources in the area believe it is not unlikely that Kurdish troops – operating in al-Hasakah and who are faithful to the government of Damascus – are willing to be spearheaded against the US forces. Many of these troops remained loyal to Syria: they reject any occupation forces on its land or the partition of the country.”

There are references to 1983 events where hundreds of US Marines and French paratroopers were killed following double suicide attacks by Islamists in Beirut. As a consequence of these attacks, the American forces left in a rush. The future could well mirror this past event.

Possibly this is fake news.

There are only a handful of these neoconservatives. Why do Americans tolerate them?

Why doesn’t Trump have them arrested? They are anti-American, pro-Israel to the core. The Neoconservatives are the worst enemy of Americans and of all mankind.

It looks like the Russians have had enough of Washington’s arrogance.

Russian general Konashenkov, whose Su-35 chased away the inferior US F-22 that was attempting to interfere with a Russian attack on ISIS said that any claims made by US military officials concerning the fact that there is “any part of the airspace in Syria that belongs to the US” are “puzzling.”

Konashenkov also said that “Syria is a sovereign state and a UN member and that means that there can be no US airspace ‘of its own.’ Unlike the Russian Air Force, the US-led coalition is operating in Syria without any legal basis.”

Will Washington realize that it has squandered its leadership in the Middle East and go home, or will Washington bring more humiliation upon America?