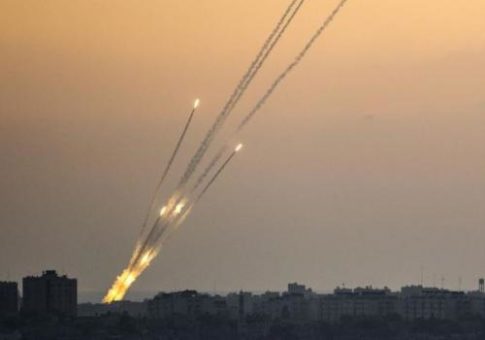 Following last week’s escalating protests and violence in Israel and the Palestinian territories which also witnessed two days of sporadic rocket volleys out of Gaza and retaliatory air strikes by Israel, there are new reports Monday of a fresh round of rocket attacks.

During Monday evening (local time) the Israeli Army confirmed via the IDF spokesperson that, “A short while ago, rockets were launched from the Gaza Strip towards Israel. Hits have not yet been identified.” And the IDF once again repeated its warning that Hamas would be retaliated against following any and all rocket fire: “In response to the rocket, an IDF tank and the IAF targeted Hamas terror posts in the southern Gaza Strip. The IDF holds Hamas responsible for these aggressive acts originating from the Gaza Strip.”

Israeli media has subsequently confirmed that a rocket hit southern Israel Monday night but with no damage or injuries, and with warning sirens failing to sound. The IDF in turn struck Hamas outposts in the southern Gaza Strip using tanks and planes according to Israeli media sources.

IDF media statements have also claimed a series of smaller attacks on Israeli targets from Palestinians throughout Monday, including small arms attacks on a military outpost in the vicinity of Beit El (north of Jerusalem), and another assault on an Israeli civilian bus in the same region, though no casualties were reported.

Since last Thursday Israeli rocket siren warnings have been sounding semi-frequently as the threat of more attacks out of Gaza continues to loom. Regional media over the weekend also reported that the Israeli military has discovered and destroyed a Hamas “attack tunnel” that reached from the Gaza Strip into Israeli territory – the second to be uncovered in six weeks, according to Israeli military sources.

Though the figure could likely be higher, the number of casualties since clashes began last Thursday includes 4 Palestinians dead (2 Hamas members and 2 civilian protesters) and multiple dozens wounded primarily in Israeli air strikes on the Gaza Strip, which are notorious for causing mass civilian casualties.

Meanwhile, the region continues to be on edge as widespread protests have continued since the end of last week in response to Trump’s speech formally recognizing Jerusalem as the Israeli capital and announcement of plans to move the US embassy from Tel Aviv to Jerusalem. Many of these protests spiraled into violent confrontations at various locations across Israel and the Palestinian territories, including clashes between Arab protesters and Israeli soldiers in Ramallah and other places in the West Bank and Gaza Strip.

Protests have frequently featured the burning of American, Saudi, and Israeli flags as well as images of President Trump, and in Lebanon rioting protesters actually breached US Embassy gates in Beirut on Sunday, after which they were repelled by tear gas and water cannon from Lebanese security forces.