Anyone looking to take advantage of the federal food stamp program in the state of Wisconsin may soon have to pee in a cup before rushing to the grocery store each month for their taxpayer subsidized sugary beverages and assortment of Hostess baked goods.  As the StarTribune points out today, Wisconsin Governor Scott Walker took steps earlier today that could eventually make his state the first to require drug tests for able-bodied adults applying for food stamps.

Gov. Scott Walker moved ahead Monday with his plans to make Wisconsin the first state to drug test able-bodied adults applying for food stamps, a move blocked by the federal government or found to be unconstitutional when other states have tried.

Wisconsin’s plan was approved by the Republican-controlled Legislature more than two years ago, but it languished because it conflicts with federal rules prohibiting states from imposing additional eligibility criteria on food stamp recipients.

Walker approved a rule change to implement the screening and sent it to the Legislature for review Monday. Walker spokesman Tom Evenson said the governor believes he has the authority to implement the rule.

The Legislature has four months to review the rule and it could take a year after its approval before the testing would begin. Lawsuits by those who oppose the drug testing are expected once it’s implemented, assuming the federal government doesn’t step in and block it in the meantime.

Under the plan, childless FoodShare participants who fail a drug test would be eligible for state-funded rehabilitation treatment if they don’t have any other way to pay for it. FoodShare is Wisconsin’s name for the federal Supplemental Nutrition Assistance Program.

Not surprisingly, opponents of Walker’s efforts promised a constitutional challenge if his plan were to ever be implemented…

“The state could do far more to expand the workforce by investing in broader access to effective drug treatment programs, rather than spending scarce state resources on the administration of drug screening and testing requirements,” said Jon Peacock, research director for Kids Forward, which advocates for children and families in Wisconsin.

Peacock said he was certain there would be a legal challenge over the constitutionality of drug screening food stamp recipients as well as whether such a move would be a violation of federal law governing the food stamp program.

…and if history is any guide, they would probably win that challenge.  Florida was the last state that had a drug test requirement for food stamp recipients but it was blocked by a federal appeals court in 2014 after it was found to violate constitutional protections against unreasonable searches.

Of course, earlier this year we noted that 13 Alabama counties experienced some ‘shocking’ results, or maybe not depending on your natural level of cynicism, when they decided to once again require able-bodied food stamp recipients, without dependents, to be employed and/or engaged in a job-training program in order to participate in the program for more than 3 months over a 3-year period…namely a small 85% reduction in food stamp participation. Per AL.com:

Thirteen previously exempted Alabama counties saw an 85 percent drop in food stamp participation after work requirements were put in place on Jan. 1, according to the Alabama Department of Human Resources.

During the economic downturn of 2011-2013, several states – including Alabama – waived the SNAP work requirements in response to high unemployment. It was reinstituted for 54 counties on Jan. 1, 2016 and for the remaining 13 on Jan. 1, 2017. As of April 2017, the highest jobless rate among the 13 previously excluded counties was in Wilcox County, which reported a state-high unemployment rate of 11.7 percent, down more than 11 percentage points from the county’s jobless rate for the same month of 2011.

But sure, there is no fraud in the entitlement programs…Scott Walker is just a mean guy.

For those who missed it, below is a look back at a prior post which detailed exactly how Americans are spending the nearly $7 billion they receive through the SNAP program each year.

A new study just released by the USDA, offers a very detailed look at exactly how participants in the “Supplemental Nutrition Assistance Program” (SNAP, aka Food Stamps) spend their taxpayer-funded subsidies.  Unfortunately for taxpayers, the amount of money spent on soft drinks and other unnecessary junk foods/drinks is fairly staggering.  But, we suppose it’s a nice taxpayer funded subsidy for the soda industry…so score one for Warren Buffett and the Coca Cola lobbyists.

Per the study, nearly $360mm, or 5.4% of the $6.6BN of food expenditures made by SNAP recipients, is spent on soft drinks alone.  In fact, soft drinks represent the single largest “commodity” purchased by SNAP participants with $100mm more spent on sodas than milk and $150mm more than beef.

That is according to a new study released by the Food and Nutrition Service, the federal agency responsible for running the Supplemental Nutrition Assistance Program (SNAP), commonly known as the food stamp program.

By contrast, milk was the top commodity bought from the same retailer by customers not on food stamps.

In calendar year 2011, according to the study, food stamp recipients spent approximately $357,700,000 buying soft drinks from an enterprise the study reveals only as “a leading U.S. grocery retailer.” 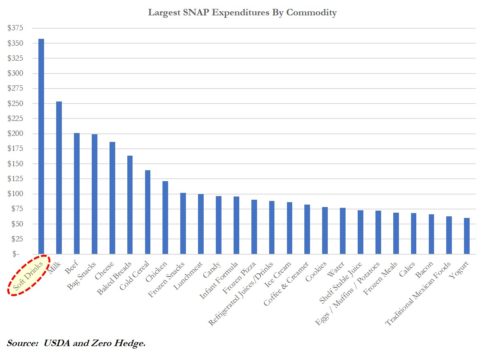 Even worse, when we added up all of the commodities that would typically be considered “junk food” (i.e. soft drinks, candy, cakes, energy drinks, etc.), we found that roughly $950mm, or just over 14% of the aggregate $6.6BN of food expenditures made by SNAP recipients, is spent on unnecessary, unhealthy products. 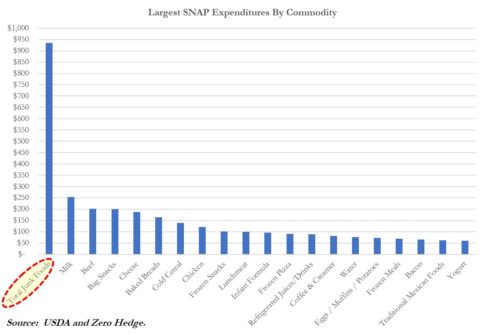 It’s a good thing democrats re-branded Food Stamps as the “Supplemental Nutrition Assistance Program”….otherwise we would have confused it for a blatant waste of taxpayer money on sodas and energy drinks.