After a day of escalating violence in Israel and the Palestinian territories which left at least two Palestinians dead and dozens injured in clashes with police and Israeli soldiers, Israel is on high alert with public alarm warnings sounding across multiple communities in the south after at least three rockets were from fired from the Gaza Strip Friday evening. Meanwhile Israel has commenced retaliatory airstrikes on the Gaza Strip just after 9pm local time, and according to early unverified reports there are already possibly dozens Palestinians injured and at least one death.

In the early evening the Israeli Army issued public statements via its IDF spokesperson account saying that Israel’s Iron Dome system intercepted a rocket launched from Gaza, and there were no reports of casualties or damage. The IDF also listed multiple Israeli towns in southern Israel which had rocket alarms sound warnings of potential incoming strikes. 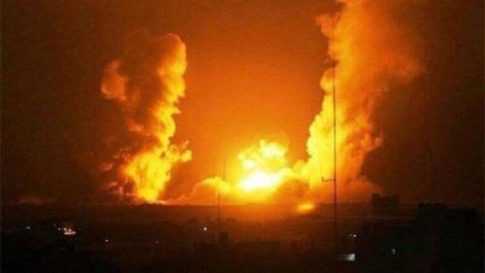 And later in the evening the IDF confirmed that Israeli Air Force jets struck inside Gaza in response to the rockets: “In response to the projectiles fired at Israel from Gaza earlier today, IAF aircraft targeted a Hamas training compound & an ammunition warehouse in the Gaza Strip.”

Following a volley of rockets claimed by a Hamas associated group the previous day, the IDF once again reiterated that it “holds Hamas solely responsible for all hostile acts against Israel emanating from the Gaza Strip.” Hamas leaders have vowed a third Palestinian intifada in response to President Trump’s formal recognition of Jerusalem as the capital of Israel which was announced earlier in the week. “We should call for and we should work on launching an intifada in the face of the Zionist enemy,” Hamas leader Ismail Haniyeh in a speech in Gaza Thursday.

The first moments of the transfer of casualties due to the Israeli bombing in northern #Gaza#Jerusalem #JerusalemIsTheCapitalofPalestine pic.twitter.com/CFMQW520Xs

A rocket fired from Gaza on Friday night exploded in Sderot. Cars were damaged but no casualties were reported. This was the third rocket fired toward Israel from the Palestinian enclave in a day. The first was intercepted by the Iron Dome missile defense system, while the second failed to reach Israeli territory.

Below is a timeline of tonight’s events since the initial rocket attack from Gaza. This is a developing story.

Israeli aircraft have bombed an alleged Hamas training compound in the Gaza Strip. Announcing the strike on Twitter, the IDF said it holds Hamas “solely responsible for all hostile acts against Israel” from the region.

Around 750 Palestinians have been injured in clashes with Israeli security forces, according to the latest figures from the Palestinian Red Crescent.

Palestinian President Mahmoud Abbas has said that the US is no longer a legitimate broker of Israeli-Palestinian peace following President Donald Trump’s Jerusalem decision.

“We reject the American decision over Jerusalem. With this position the United States has become no longer qualified to sponsor the peace process,” Abbas said in a statement.

Palestinian chief negotiator Saeb Erekat has said he will not talk with the US until the decision to recognize Jerusalem as the Israeli capital is reversed. The diplomat issued the statement in an interview with Al Jazeera TV.

A demonstration has begun outside the US Embassy in London to protest against Donald Trump’s decision to recognize Jerusalem as the capital of Israel.

American ambassador to the UN Nikki Haley has defended the US against accusations it has compromised its position as a mediator for Middle East peace, saying that her country has not taken a position on Jerusalem boundaries and is not advocating changes to arrangements of holy sites.

Haley said the US is committed to the peace process but added that Israel “will never be bullied into an agreement by the UN or by any collection of countries that have proven their disregard for Israel’s security.”

The Israeli security forces report that a rocket was fired from the Gaza Strip. Air raid sirens were heard in areas around Bnei Shimon in southern Israel.

Britain’s UN Ambassador Karen Pierce says her country “strongly encourages” the US to bring forward a detailed proposal for a peace settlement in the Middle East. Pierce made the statement amidst rising tensions across the region following US President Donald Trump’s decision to recognize Jerusalem as the Israeli capital.

Israel’s Iron Dome missile defense system has intercepted a rocket fired from the Gaza Strip, according to the country’s military.