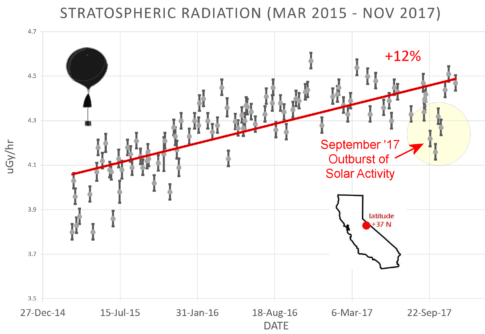 ATMOSPHERIC RADIATION IS INCREASING: Since the spring of 2015, Spaceweather.com and the students of Earth to Sky Calculus have been flying balloons to the stratosphere over California to measure cosmic rays. Soon after our monitoring program began, we quickly realized that radiation levels are increasing. Why? The main reason is the solar cycle. In recent years, sunspot counts have plummeted as the sun’s magnetic field weakens. This has allowed more cosmic rays from deep space to penetrate the solar system. As 2017 winds down, our latest measurements show the radiation increase continuing apace–with an interesting exception, circled in yellow:

In Sept. 2017, the quiet sun surprised space weather forecasters with a sudden outburst of explosive activity. On Sept. 3rd, a huge sunspot appeared. In the week that followed, it unleashed the strongest solar flare in more than a decade (X9-class), hurled a powerful CME toward Earth, and sparked a severe geomagnetic storm (G4-class) with Northern Lights appearing as far south as Arkansas. During the storm we quickened the pace of balloon launches and found radiation dropping to levels we hadn’t seen since 2015. The flurry of solar flares and CMEs actually pushed some cosmic rays away from Earth.

Interestingly, after the sun’s outburst, radiation levels in the stratosphere took more than 2 months to fully rebound. Now they are back on track, increasing steadily as the quiet sun resumes its progress toward Solar Minimum. The solar cycle is not expected to hit rock bottom until 2019 or 2020, so cosmic rays should continue to increase, significantly, in the months and years ahead. Stay tuned for updates as our balloons continue to fly.