While many people would argue that driving on LA roads is “like hell” on a good day, today is a very bad day as wildfires and shut the shockingly busy 405 Freeway in both directions…

BREAKING: All lanes of the 405 are shut down. This will have a MAJOR impact on so many other freeways/roads! #NBCLA https://t.co/hUabdEIZnn

This is what drivers are facing…

This is video on the 405 near the Getty Center. They just closed this part of the highway. #LAFire #ThomasFire #AMJoy pic.twitter.com/lOc2bGqFjX

Traffic nightmare, plan ahead. 405 shut down between 101 and 10 due to fire. pic.twitter.com/Zxy84BEMtM

Aerial video from Sky5 showed the fire burning on the east side of the freeway, the Getty Center is located to the west of the 405. 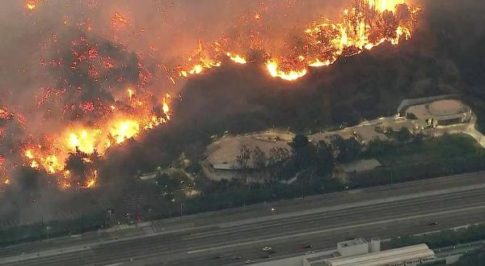 A SigAlert was issued for the closure of all northbound lanes on the 405 Freeway just after 5 a.m., according to the California Highway Patrol’s traffic incident log.

The freeway was likely to be impacted for the rest of the morning, Stewart said. “It is going to be a significant commute issue.”