– Largest Crypto-Mining Exchange Confirms It Was Hacked, Over $50 Million In Bitcoin Stolen:

Update: as @MillionsBitcoin points out….

… the total amount of bitcoins stolen from Nice Hash is 4736, or just over $62 million, and they have ended up at the following address:

As Bitcoin explodes higher on what now appears to be constant demand out of South Korea, there were unconfirmed (at least until recently) reports that Nice Hash, the largest crypto-mining marketplace, has been hacked with over 4,000 bitcoins worth over $50 million stolen.

NiceHash has suffered a completely unpredictable and unforeshadowed cut and run^W^W^Whack, so much for the home miners and their extensive graphics card collections https://t.co/f3muLUtPAU https://t.co/bpqRl4CTob

Visits to the website over the past 13 hours were greeted with the following maintenance notice. 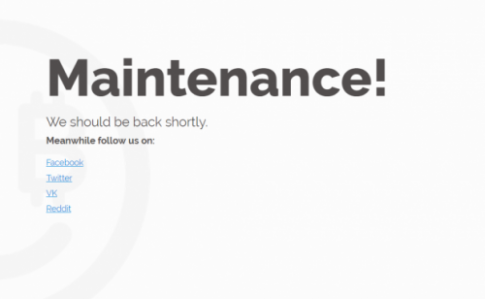 Dear NiceHash user, our service is currently under maintenance.
We are sorry for the inconvenience and please stay tuned for updates.
Thank you for your understanding.

According to TweakTown, there are some posts by people saying that NiceHash transferred all of the BTC sitting in miners’ wallets into a single wallet before NH fully went down.

Why is my nicehash wallet zero? I checked the transactions on a 3rd party website and my balance was zeroed out.

If NiceHash were hacked, then it makes sense that the hacker pushed all of the Bitcoin into a single wallet and then transferred it to their own wallet. There’s no way of getting it back if that’s the case, and if that is indeed the case, there’s no way NiceHash can restore money to miners’ wallets. If we’re talking about $50 million or more, it’s going to hurt, bad.

Earlier, WklTribune reported that they’ve been in contact with NiceHash CEO Andrej Nabergoj, who said that NiceHash is “assessing the situation and working with the authorities. We’ll have a public statement shortly”.

And then, moments ago NiceCash confirming there was a security breach:

Here is our official PRESS RELEASE about the security breach!https://t.co/yhfdjXkJwc

Unfortunately, there has been a security breach involving NiceHash website. We are currently investigating the nature of the incident and, as a result, we are stopping all operations for the next 24 hours.

Importantly, our payment system was compromised and the contents of the NiceHash Bitcoin wallet have been stolen. We are working to verify the precise number of BTC taken.

Clearly, this is a matter of deep concern and we are working hard to rectify the matter in the coming days. In addition to undertaking our own investigation, the incident has been reported to the relevant authorities and law enforcement and we are co-operating with them as a matter of urgency.

We are fully committed to restoring the NiceHash service with the highest security measures at the earliest opportunity.

We would not exist without our devoted buyers and miners all around the globe. We understand that you will have a lot of questions, and we ask for patience and understanding while we investigate the causes and find the appropriate solutions for the future of the service. We will endeavour to update you at regular intervals.

And the best part:

While the full scope of what happened is not yet known, we recommend, as a precaution, that you change your online passwords. We are truly sorry for any inconvenience that this may have caused and are committing every resource towards solving this issue as soon as possible.

One wonders: if one has just had millions in bitcoin stolen, will changing the password really help?

So far Bitcoin has taken the massive hack well, and continues to rise, approaching $13,500.

The news could be negative – at least in the short-term – for companies catering to “home miners” such as Nvidia, the biggest beneficiary of the bitcoin mining euphoria.

1 thought on “Largest Crypto-Mining Exchange Confirms It Was Hacked, Over $50 Million In Bitcoin Stolen”