Just after 430pm ET we showed that bitcoin, and the entire crypto space, tumbled, with Bitcoin plunging from session highs just under $12,000 to a low of $10,600 on what appeared at first sight to be no news. 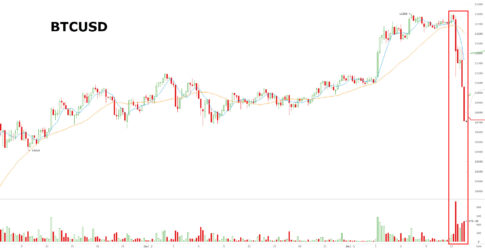 However, in retrospect this appears to not have been the case, and as the Telegraph reported just around the time of the big drop, UK “ministers are launching a crackdown on the virtual currency Bitcoin amid growing concern it is being used to launder money and dodge tax.”

Taking a page out of the Chinese playbook, the UK Treasury has announced plans to regulate the Bitcoin that will force traders in so-called crypto-currencies to disclose their identities and report suspicious activity.

According to the Telegraph, while “until now, anybody buying and selling Bitcoins and other  digital currencies have been able to do so anonymously, making it attractive to criminals and tax avoiders. But the Treasury has now said it intends to begin regulating the virtual currency, which has a total value of £145 billion, to bring it in line with rules on anti-money laundering and counter-terrorism financial legislation.”

John Mann, a member of the Treasury select committee, said he expected to hold an inquiry into the need for better regulation of Bitcoin and other alternative currencies in the new year.

He said: “These new forms of exchange are expanding rapidly and we’ve got to make sure we don’t get left behind – that’s particularly important in terms of money-laundering, terrorism or pure theft.

“I’m not convinced that the regulatory authorities are keeping up to speed. I would be surprised if the committee doesn’t have an inquiry next year. “It would be timely to have a proper look at what this means. It may be that we want speed up our use of these kinds of thing in this country, but that makes it all the more important that we don’t have a regulatory lag.”

The proposed changes come amid increasing fears that Bitcoin is being used by gangs to launder the proceeds of crime while also attracting currency speculators – with the value of the coin soaring in the past 12 months.

While such legislation by the UK alone would hardly have a major impact on crypto pricing – after all the UK is a very minor player in a market that is dominated by Korea and Japan (as proxies for China), and to a growing extent, the US, the new rules will also be applied across the European Union, and “are expected to come into force by the end of the year or early in 2018, the minister in charge has said.”

As for the EU, the new regulations are expected to be included in amendments to current European Union wide legislation designed to prevent money laundering and terrorism financing.

In terms of actual changes, the Telegraph notes that cryptocurrency exchange platforms and wallet providers will be obliged to report suspicious transactions and carry out due diligence on customers. That means the identities of Bitcoin users will no longer remain anonymous.

Stephen Barclay, the Economic Secretary to the Treasury, revealed plans to change the legislation in a written parliamentary answer.

Mr Barclay said: “The UK government is currently negotiating amendments [to the anti-money-laundering directive] that will bring virtual currency exchange platforms and custodian wallet providers into Anti-Money Laundering and Counter-Terrorist Financing regulation, which will result in these firms’ activities being overseen by national competent authorities for these areas.  “We expect these negotiations to conclude at EU level in late 2017/early 2018.”

That said, neither the UK, nor the EU will be the first to demand a crackdown on bitcoin anonymity. In fact, since China’s infamous block of cryptocurrency exchanges in September, bitcoin has risen nearly fourfold, seemingly undaunted by anything that regulators, central banks and sovereigns have thrown at it.

It remains to be seen if this time will be any different, although after sliding to a Sunday session low of $10,600 bitcoin has already cut its losses in half, and was trading at $11,280 at last check.