While Trump’s Twitter activity from yesterday continues to drive media and political outrage, especially in the UK, and with the focus of the frenzied coverage being that the president retweeted a far-right U.K. leader’s “anti-Muslim videos”, there is actually something much more interesting concerning the context to the “Muslim Destroys A Statue Of Virgin Mary” video.

That particular video shared by the president is from 2013 and shows a Free Syrian Army (FSA) commander named Omar Gharba destroying a Virgin Mary statue as the group invaded a Syrian Christian town. In a geopolitical and deeply ironic twist demonstrating the absurdity and contradictions of US foreign policy, the radical Islamist commander was actually supported by the United States at the time as part of the FSA, which the media and US government deemed “moderate”.

So a sitting US president shared a video which reveals a Syrian “rebel” fighter committing war crimes who was part of one of the very groups backed by the CIA as official US policy under the Obama administration. Of course it is likely that Trump himself is not fully aware of this, yet the astounding geopolitical irony in this should not be missed, even as public outrage is reduced to merely discussing “anti-Muslim bigotry” and whether or not Trump is being “presidential”.

But as former President Obama used to frequently say, “this is a teachable moment”…

And while multiple media outlets, for example NPR, continue to claim the videos are “unverified” and “have no context” or are of “murky origins” (as the Washington Post wrongly claims), this particular video especially was widely shared and discussed among the world’s top Syria analysts and Middle East scholars at the time.

The video was taken in 2013 and shows the Wahhabi cleric and FSA commander smashing the Christian statue in connection with the US-backed group’s prior attack on Yakubiya in Idlib province. The book, The Islamic State: Combating The Caliphate Without Borders, authored by counter-terrorism experts Yonah and Dean Alexander, gives his full name as Omar Gharba al-Khojji and like vast numbers of FSA fighters he eventually jointed ISIS (some online sources alternately list his name as Omar Raghba). 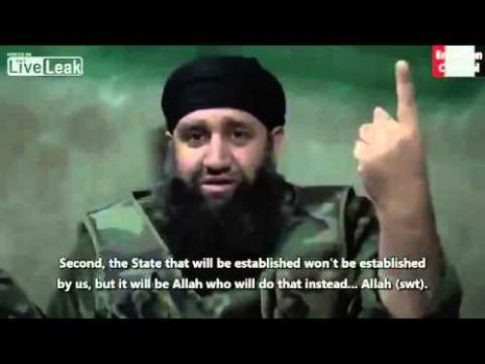 Yakubiyah was a mostly Christian village principally comprised of Armenian Orthodox and Catholic churches which after being taken over by the FSA was subsequently held by ISIS. The local Christians saw no distinction between the invading FSA and ISIS fighters as it was primarily the US-backed FSA which began massacring Christians and looting Christians.

Even the US government funded Voice of America news had this to say based on an interview with a Christian survivor:

Christian refugees described to VOA the execution of a half dozen of their co-religionists in the northwestern village of al-Yakubiye, in Idlib province, by Sunni Muslims aligned with the Western-backed Free Syrian Army. Rahel, a 45-year-old former teacher, said, “Al Nusra didn’t come to our village; the people who came were from villages close by, and they were Free Syrian Army.”

…Nearly a third of Syria’s Christians, an estimated 600,000, have fled the country. Before the war, Christians accounted for about 10 percent of Syria’s population of 22 million.

And The Daily Beast also confirmed at the time that “nearly all Christians have fled [Yakubiyah] after half a dozen were executed with their heads chopped off and about 20 more were kidnapped” by the US sponsored FSA.

Furthermore, an October 2013 report in Arabic media confirmed that,

Terrorists belonging to al-Nusra front broke into homes in Yakubiyah in Syria’s Idlib province, killed a Chrisitan man and destroyed a Virgin Mary statue. Upon arrival at a house that had the statue of virgin Mary, Wahhabi cleric, Omar Gharba’ carried the statue of the Virgin Mary after it was taken over by militants from the “Islamic State in Iraq and the Levant” (ISIL) and broke it by throwing it on the ground. He stated that he and his fellow Wahhabis won’t tolerate any form of worship except strict Wahhabism of Saudi Arabia.

“God willing, Only God will be worshipped in the land of the Levant,” the terrorist who destroyed the statue said, noting that “no other idol will be worshiped after these days . We won’t accept but the religion of Allah and the Sunnah of our Prophet Mohammed bin Abdullah.”

In 2012 and 2013 Omar Gharba’s name appeared somewhat frequently in Western news reports as he was interviewed on a few occasions and presented as a “moderate” rebel, for example by BBC Arabic in 2012.

The below video is one such example of Omar Gharba insisting that he and his fellow FSA militants would be tolerant and respectful of Christians and other religious minorities should they inherit power by toppling the Assad government  – though he was subsequently outed as the destroyer of the Virgin Mary statue, as the edit of the video interview makes clear.

And we know the rest of the story well: the media swallowed and presented such lies of FSA rebel commanders wholesale. But in terms of exposing this false history of a “moderate” uprising and revolution in Syria, Trump’s tweet could actually serve to educate the public, just not in a way the media would have us believe.

To Trump’s credit, he announced last summer that he shut down the CIA program of covert support to rebel factions in Syria. This came after he viewed a gruesome video which showed “moderate” fighters beheading a child which reportedly helped him make the decision.