– Fault Line Wakes Up: New Zealand Could Be DESTROYED By Massive 9.0 Earthquake:

A 2016 earthquake has awoken a fault line that was thought to be dormant. Now that it’s becoming active, fears have arisen that New Zealand could be destroyed by a massive 9.0 magnitude earthquake. 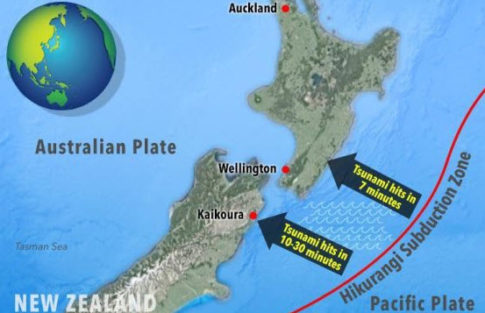 The devastating Kaikura earthquake in 2016 has resurrected the Hikurangi subduction zone where two tectonic plates clash and one is pushed down. Geologists are now warning that this trench could cause a massive earthquake on the ocean floor, and could trigger other 9.0 magnitude earthquakes and tsunamis that will reach the western coast of the islands in just seven minutes.

“We need to think Japan 2011 basically, because if our whole plate boundary ruptured it would be a magnitude-9 earthquake.”

The Great East Japan Earthquake and resulting tsunami smashed through the country’s north-eastern coast killing almost 16,000 people and destroying the lives of thousands more. It also triggered a major ongoing crisis at the Fukushima nuclear plant.

“One of the biggest hazards of that kind of earthquake is the tsunami that is triggered by a fault rupture offshore.,” Cochran added.

“We know from tsunami modeling from a hypothetical earthquake from the Hikurangi subduction zone that the travel times could be very short to the coast, so seven minutes for some of the south Wairarapa coast.” 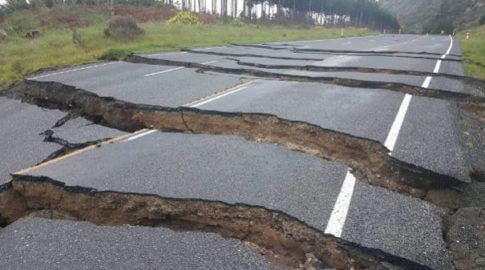 The magnitude 7.8 that destroyed houses, lifted the Kaikoura seabed by 2m, tore apart farmland, and wrecked kilometers of State Highway 1, may be minor compared to what could come, Cochran said.

“One thing about reflecting on from the Kaikoura earthquake is we don’t want people to think this is the big one.”

An international team hopes to drill boreholes into the subduction zone and place monitoring equipment there to act as an early warning system.