The price of the largest cryptocurrency soared 16% over the weekend, bursting through $8,000 and $9,000 at a record pace and nearing the Maginot Line so many predicted at $10,000. 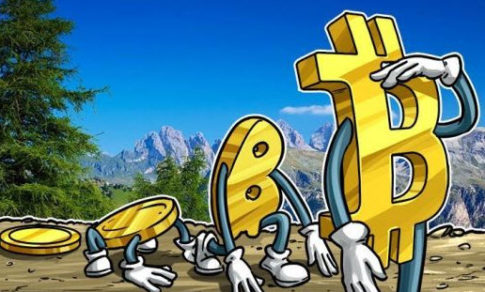 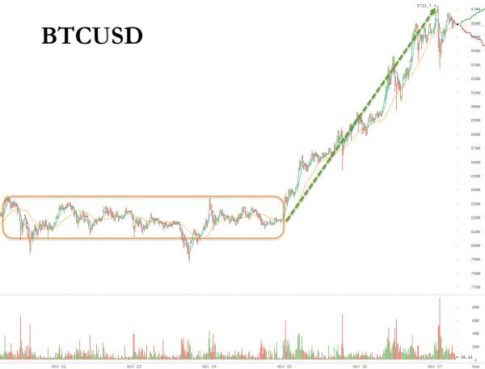 As the price has soared, more and more mainstream interest has grown with one major exchange – Coinbase – now having more client accounts that Charles Schwab

“The Coinbase data is evidence that adoption is not slowing down,” Alistair Milne, the Monaco-based manager of the Altana Digital Currency Fund, told Reuters.

Notably, as Bitcoin tops $160 billion, the market cap of all cryptocurrencies topped $300 billion for the first time – making their estimated market value greater than that of Wal-Mart.

However, as Reuters reports, the staggering price increases seen in the crypto-market have led to multiple warnings from central bankers, investment bankers and other investors that it has reached bubble territory.

Some say that this could prompt regulators in the West to crack down on the market in a similar fashion to China, where bitcoin exchanges were shut down earlier this year.

“Regulators know the rewards of cryptocurrency and blockchain could be huge but (they) have more than one eye on the catastrophic ramifications if good governance, stability and control are not preserved,” said David Futter, a fintech partner at law firm Ashurst, in London.

“If the carrot of self-regulation proves insufficient, the regulators will not hesitate to use their stick.”

Most critically though it is the central bankers that matter and they appear confused by crytpocurrencies’ surge – some unable to sleep due to the disruptive change looming and others dismissive of the ‘bubble’. As Reuters reports, it keeps them awake at night because these private currencies threaten their control of the banking system and money supply, which could undermine the monetary policies they use to manage inflation.

“The problem with bitcoin is that it could easily blow up and central banks could then be accused of not doing anything,” European Central Bank policymaker Ewald Nowotny told Reuters.

“So we’re trying to understand whether bank activity in relation to cryptocurrency trading needs to be better regulated.”

“Bitcoin is a sort of tulip,” ECB Vice President Vitor Constancio said in September, comparing it to the Dutch 17th century trading bubble.

“It’s an instrument of speculation.”

China and South Korea, where cryptocurrency speculation is popular, banned fundraising through token launches, whereby a newly cryptocurrency is sold to finance a product development.

“they should not seek… to promote the use of virtual currencies” because these could “in principle affect the central banks’ control over the supply of money” and inflation.

But St. Louis Fed President James Bullard admitted to Reuters in a recent interview what the real concern was:

Yet Japan in April recognized bitcoin as legal tender and approved several companies as operators of cryptocurrency exchanges but required them register with the government.

Finally, in an effort to counter the private decentralized cryptocurrencies, some central banks such as Sweden’s Riksbank and the Bank of England are also looking at the merits of introducing their own digital currency.

But not everyone is concerned…

$BTC a hair under $10k and $ETH a hair under $500. It’s official: if someone calls crypto a scam or a bubble, you can literally slap them in the face.

While US exchanges anxiously await the $10,000 as some sell-the-news event, Korean exchanges are already trading above $10,000 and holding it…