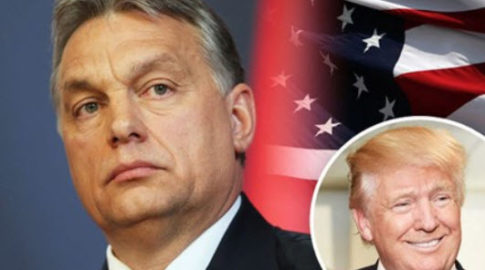 The deep state is vehemently opposed to Orban’s nation statism…his conservatism and his stance against open borders. For the neo-liberal cabal under the watchful eye of George Soros, Orban must go.

In his speech accepting his party’s endorsement, Orban said he was fighting against “globalist” views that threaten the EU’s Christian nations and their moral foundations, for which he blamed Soros.

“Some countries in Europe decided to transcend Christianity and their own national character,” he said. “They want to step into a post-Christian, post-national era.”

“To execute Soros’s plan they want to root out governments which represent national interests around Europe, and that includes us,” he said. “They act like Soviet agitprop agents once did. We old war-horses know them by their smell.”

As we previously concluded, perhaps it’s inaccurate to accuse the US government of hypocrisy in this case. After all, pressuring RT America with the intent of silencing the news network and spending our tax dollars propping up US-friendly media outlets in the Hungarian countryside are actually two sides of the same coin: the US government will tell you what kind of media you are allowed to consume.

If you are a media network in the United States that allows voices who oppose Washington’s neocon-dominated foreign policy they will shut you down. If you are a news outlet in the Hungarian countryside that spews the US party line, they will prop you up. Both cases are the same: your media will toe the US government official line or else.

Note to Washington: This is not 1950. Hungary has been a fully free and democratic country with plenty of free elections under its belt. It does not need you to come in and attempt to manipulate its newspapers and broadcast media. What would you do if China sent in a few million dollars to prop up US publications who agreed to push the Beijing line? What about if Tehran sent some money to publications pushing the Ayatollah party line? You cannot even tolerate RT America — which is largely staffed by Americans but dares to feature prominent Americans who challenge the neocon foreign policy line. Hands off Hungary!

Note to Viktor Orban: You risked arrest — and worse — in June, 1989 when you directly confronted the communists who were occupying your country. Now that Hungary’s freedom has been won — in no small way due to your efforts — do not allow Washington’s neocons to take it away from you! If you do not confront this violation of Hungarian sovereignty, the neocons will continue to increase the pressure. The neocons want you out! Just this week, neocon commentator Anne Applebaum wrote that you are a “neo-Bolshevik” who has “little to do with the right that has been part of Western politics since World War II, and…no connection to existing conservative parties.” Do a little research and you will notice that Applebaum is a member of the International Advisory Council of the Center for European Policy Analysis — the organization your own government funded for a big conference this summer! Neocon knives are out for you. You’d be smart to make a better assessment of who are your friends and enemies in the United States…before it’s too late.