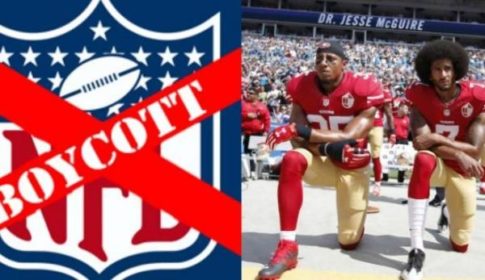 As the NFL continues to try to address the ongoing civil war between Dallas Cowboys owner Jerry Jones and Commissioner Roger Goodell, not to mention the intermittent hostile fire from the White House, viewers are increasingly deciding they’ve had enough and are abandoning professional football viewership altogether.  As the NY Post points out today, the embattled league saw ratings dip 6.3% in Week 11 meaning 1 million fewer people tuned in to see players take a knee during the national anthem versus last year.

The 6.3 percent slump — worsening from comparable declines of 5.6 to 5.7 percent during the previous three weeks — plagued a week whose off-the-field drama made gridiron tackling seem almost tame by comparison.

After starting 11.8 percent behind last year’s TV audience for NFL games in Week 1, league viewership had either held its own or narrowed the gap through Week 8.

Meanwhile, the ratings dip, combined with massive subscriber losses (see: ESPN Lost 15,000 Subscribers A Day In October), has taken a huge toll on ESPN which Yahoo News reports will have to cut some $80 million in salary costs to offset their plunging top line.

ESPN is poised to slash an estimated $80 million in salaries and other costs in coming weeks, sources tell Sporting News.

The third round of layoffs in two years at the Disney-owned sports network is expected to come down after Thanksgiving and before Christmas. Sporting News broke the news that ESPN planned to lay off up to 60 people in late November and early December. Richard Deitsch of Sports Illustrated followed up with a report that said 100 positions could be impacted.

ESPN lost a whopping $1 billion in affiliate revenue after dropping 13 million subscribers in just six years, according to the SportsBusiness Journal. Sports insiders agree ESPN overpaid for the NFL’s “Monday Night Football” ($1.9 billion annually) and the NBA ($1.4 billion a year). During 2016, ESPN’s prime-time viewership fell 19 percent, according to the SBJ. Rather than driving Disney’s profits, ESPN has been dragging them down, spooking Wall Street analysts.

Meanwhile, ESPN management threw money at many anchors, analysts and reporters whose contracts were up in recent years to stop them from jumping to FS1 and other competitors. Some lost those high-paid TV gigs this spring. But ESPN is still on the hook to pay their full salaries until they get a new job elsewhere. Not many have over the past six months. Given the length of some of these expensive deals, not many will in the future, according to Awful Announcing.

Perhaps it’s time for the NFL to admit that while most Americans can agree that professional football is really fun to watch, roughly half of them are going to disagree with whatever political stance its players decide to cram down their throats during games…so maybe best to just stick to football.