US shoppers’ lust for Black Friday bargains this year has reached absurd new levels, evidenced by a viral joke that morphed into a disturbing new trend to help shoppers beat Wal-Mart and other big box store crowds by disguising themselves as temporary holiday employees. It started when Twitter user @OverlyLiked announcing he would be selling his Walmart vest for $100.

“I’m selling this Walmart vest for $100,” he wrote. “Use it to skip the line during Black Friday. You can even walk in, grab what you want, and walk out.”

I’m selling this Walmart vest for $100. Use it to skip the line during Black Friday. You can even walk in, grab what you want, and walk out????????‍??. pic.twitter.com/Q0UyDHUeU0

Although the tweet was reportedly meant as a joke, earning @OverlyLiked more than 30,000 retweets and almost 80,000 likes, it wasn’t long before he was being inundated with real requests to buy his shirt.

“The popularity of the tweet really did not surprise me… What shocked me was the news coverage of that,” @OverlyLiked told RT, explaining that apart from the bidders, he was also sought out by numerous media outlets covering the story.

But @OverlyLiked’s disappointed would-be buyers didn’t need to wait long for other offers to materialize. It seems former and current Wal-Mart employees quickly caught on to the idea and began selling their own uniforms in earnest…

Going out for Black Friday?

Pick up this Walmart vest for $30!

Now I know them Walmart vest seemed like a good deal ,but I got these Best Buy joints going for $110 walk right in , skip the line , and take whatever you want !! pic.twitter.com/eVzML3RYbQ

Walmart vest for sale ??80 dollars ..Walk right in ;Get what u want and walk right out on Black Friday ????????‍?? I’m willing to negotiate #FirstComeFirstServe pic.twitter.com/An9yHp275b

While others went out looking for them,

If anyone works or has worked at Walmart and has an employee vest..please let me buy it. I’m tryna test something out black Friday.

Meanwhile, Walmart has apparently caught on to the hustle, and has asked its employees to “question” anyone they see wearing one of their vests, but whom they do not recognize.

this spread so fast that at the manager meeting today we were told that if we see anyone we don’t recognize on thursday/black friday wearing a walmart vest, to question them. ???????????????? https://t.co/IEA9CTFrkQ

The American “Black Friday” tradition has intensified in recent years as big-box stores have sought to fend off the encroaching “Cyber Monday” when shoppers order all their items online – read Amazon – instead of trudging through massive crowds at Wal-Mart, Best Buy or any other retail mecca. Retailers typically open late Thursday evening, before the holiday has even ended, to offer massive bargains, prompting nationwide anarchy as dozens of stories and videos emerge of shoppers fighting one another for the cheapest deals on anything from blenders to widescreen TV’s to underwear. The insanity of Black Friday was perhaps encapsulated best by this meme that made the rounds a few years back: 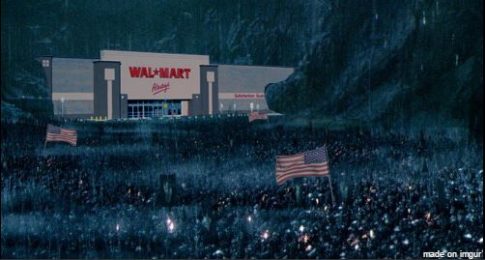