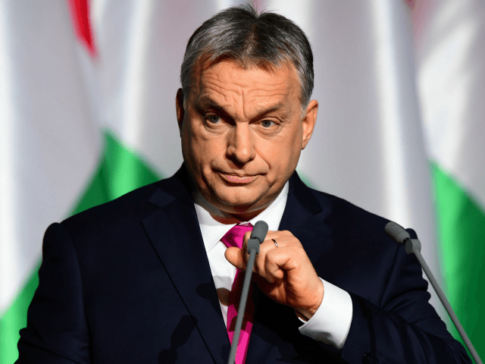 The obvious subtext to all of this is that the State Department funding effort is intended to bolster anti-government and opposition media. This suggests it is still pursuing Obama era, anti-conservative policy objectives internationally in defiance of President Trump, who has praised Prime Minister Orbán — the first European leader to back him — as “strong and brave”.

The Hungarian leader has maintained a position of strong opposition to “globalist elites, the bureaucrats who serve them, the politicians in their pay, and the agents of the Soros-type networks that embody their interests” despite fierce opposition from Brussels, pro-mass immigration NGOs, and left-liberal U.S. media, believing he is standing up for a “silent majority” of hard-pressed families across the West, who wish to preserve their Christian heritage and national identity.

Hungary says U.S. State Dept’s decision to pump $700k into rural (opposition?) radio ahead of an election year is interference.

1. Is this a @realDonaldTrump-approved use of American taxes?
2. Can you imagine the establishment heart attack if Russia pumped 700k into U.S. radio? https://t.co/n0rxQLMBLD

For its part, the Hungarian government has denounced the State Department for what it regards as blatant interference in its internal affairs ahead of national elections in Spring 2018.

“What is this if not an intervention in the election campaign and the domestic politics of Hungary? Which Washington office can judge the applications of media organisations from a Hungarian county and what kind of balanced service they would like to offer?” asked Foreign Minister Péter Szijjártó, who said it was shocking that American taxpayers’ money was being used to — to quote the State Department — “educate journalists on how to practice their trade” in an allied democracy.

“The Ministry of Foreign Affairs and Trade has summoned the U.S. Chargé d‘Affaires, asking for an explanation, and told him that we consider this a political intervention by the U.S. Department of State ahead of the elections,” a spokesman added.

That moment when a US diplomat wonders if there’s press freedom in Hungary & RTL Klub producer has the answer. BLOG: https://t.co/2vERdLB4EW

The Hungarians have also robustly rejected the State Department’s accusations that there is no press freedom in their country.

For example, Prime Minister Orbán’s Secretary of State for Public Diplomacy, Dr. Zoltán Kovács, has highlighted the following exchange between journalists at Hungarian outlets 168óra and RTL Klub — neither of which “would ever be described as linked to the Orbán Government”, in his estimation:

168óra: Is there press freedom in Hungary?

Péter Kolosi: There is. If there weren’t, then there wouldn’t be an RTL Klub either.

Dr. Kovács then questioned whether Kostelancik — who is not the U.S. ambassador to Hungary, but only fulfilling that role temporarily while the Obama appointee he formerly served is in the process of being replaced — has any mandate to be attacking Hungary’s media landscape in the first place.

He also took the Chargé d‘Affaires to task for praising journalists of the “Communist old guard” who attended his speech for supposedly “striving to speak the truth” — a scene the Hungarian described as “stomach-turning”, given their history of collaboration with the Soviet-backed dictatorship.

Prime Minister Orbán, who opposed the Leftist regime at some personal risk as a younger man, has often chided Western leaders — and the European Union in particular — of “making excuses for the crimes of Communism”, and worked to make sure its victims are given due attention since his election.

Battle for the West: Hungary’s Viktor Orbán believes the “silent majority”– who value family, country, and national identity – will prevail over the globalists of the “Soros Empire”, who seek to turn Westerners into rootless, multicultural mass consumers. https://t.co/IyKW73hczM

Dr Kovács went on the publish a more extensive response to Kostelancik and the State Department, in which he lamented their actions as “astonishing and disappointing coming from an ally”.

Beyond the “clear interference in the domestic affairs of an ally”, he noted that “the media in the U.S. has its own issues. Criticisms related to concentration of media ownership, commercial relationships, and mainstream media bias – Harvey Weinstein, anyone? — are now the stuff of everyday in the U.S.”

He concluded by observing that one of Geroge Soros’s many so-called civil society organisations launched a media training operation in Hungary around the same time as Kostalencik announced the State Department funding scheme — leaving some suspicious as to who the “partner” the State Department intends to select to deliver its programme might turn out to be.

Hungary is in the midst of a fierce struggle with Soros and his EU backers over its opposition to his plan for the migrant crisis.

Hungary believes that the EU is implementing this plan on behalf of the convicted insider trader through the compulsory redistribution of migrants by a system quotas, among other measures, and is currently conducting a national consultation on it to demonstrate that its opposition to the plan has widespread public support.

“Let’s speak to the point. Migration is not the goal of the Soros Plan, but merely its means,” Prime Minister Orbán observed in a November 12th speech.

“Millions of people in Africa and the Middle East are being encouraged to come to Europe; indeed they are even being transported here, in order to debilitate nations and deliver the coup de grâce to Christian culture.”

The Hungarian premier believes that this process of undermining nation-states, revealed as a globalist imperative by United Nations migration chief Peter Sutherland in 2012, forms part of a wider plan by EU elites “to replace an alliance of nations with a federation of states” — a United States of Europe.

“This is the only logical explanation for millions of people being transported to Europe from other cultures – as there must be some sort of explanation for why this is happening now. We cannot consider this to be an accident,” he added.

“Europe [could] defend its borders if it wanted to … what is lacking is not the ability to do so, but the will. And this lack of will is not unintentional, but the consequence of a definite underlying attitude that, in a United States of Europe, nations and their Christian character are more of a drawback than a benefit.”