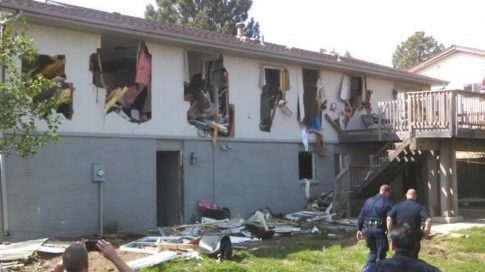 A team of SWAT officers destroyed an innocent man’s house during a 19-hour standoff—for the sake of arresting a man who was accused of shoplifting clothes.

Greenwood Village, CO – An innocent man’s home was destroyed by police after 50 SWAT officers responded to reports of a man shoplifting a shirt and two belts from a store. Even though the city declared the man’s house a complete loss, he was given just $5,000 in compensation, and he is now filing a lawsuit for “just compensation.”

Leo Lech lost his home in June 2015, after police launched a 19-hour standoff that included the use of armored vehicles, breaching rams, high-caliber rifles, chemical agents, flash-bang grenades and remote-controlled robots. While his home became “collateral damage,” neither Lech nor his family had any ties to the target the officers were pursuing.

It all started when a 30-year-old man was accused of shoplifting a shirt and two belts from a local Walmart. Police claim that when they approached Robert Jonathan Seacat, he fled the scene and officers followed him. After he drove to a nearby light rail stop, he abandoned the car he was driving and took shelter in a random house.

According to a report from the Denver Post, officers claimed that when they entered the home, “Seacat, who was on an upper floor, fired four or five shots through the floor at officers below.” Police decided to respond to one man barricaded in a home and armed with a handgun by employing 50 SWAT officers and a host of expensive technology, destroying the majority of the home, before they found their suspect in a bathroom and arrested him.

The National Tactical Officers Association (NTOA) described the strategy used by the SWAT officers as “calculated destruction,” in which they launched explosives throughout the house, room-by-room, in order to isolate Seacat. A report from Reason described the standoff:

Remote-controlled robots were also used during the raid. The first robot was deployed to track Seacat’s whereabouts inside the house and attempt to deliver a phone to Seacat so that he could directly communicate with police. However, the robot could not maneuver through the debris inside the home, and eventually got stuck.

To retrieve the robot, an officer attempted to throw a flashbang grenade upstairs toward Seacat to create a diversion. However, the grenade bounced back downstairs toward the team of officers, forcing them to scatter and retreat. The official report states that the grenade ‘failed to land in its desired location.’ Eventually, a second robot was used to retrieve the first one.”

While one may wonder why Seacat continued to stay in the house, even after police spent several hours using extreme methods to get him out, a review from the NTOA reported by the Denver Post, claimed that, “Seacat was not only actively using methamphetamine, but he had also swallowed containers of the substance, which were now leaking into his system.”

As a result of Seacat’s impaired state, the review concluded that the chemical agents used by the officers likely did not affect him, noting, “One can only speculate as to the effect this had on Seacat’s ability to think rationally, and to what degree the drug minimized the effects of any chemical munitions, which were later introduced.”

The amount of force and technology police used, in order to arrest a man who was suspected of shoplifting clothes from Walmart is bizarre, but the fact that they seemed intent on practically destroying an innocent man’s home is even worse.

According to the report from Reason, the commanding officer during the raid, Dustin Varney, instructed his team to “take as much of the building as needed, without making the roof fall,” and that is exactly what they did.

“They came and they destroyed the house. It was condemned, it had to be torn down, and they offered me $5,000,” Lech told the Denver Post, noting that his son’s family, who was renting the house from him, had all of their personal belongings destroyed, and were never compensated.

Although Lech’s house was declared “a complete loss” following the raid, the City of Greenwood Village offered him just $5,000 for temporary living arrangements. In response, he filed a federal lawsuit, claiming civil rights violations, and unjust compensation from the government. Lech told CBS Denver that he expects his case to be heard in federal court in January 2018.

1 thought on “Cops Thought Innocent Man Shoplifted a Shirt, So 50 SWAT Cops Tore Down His House”