France’s invitation to beleaguered Lebanese premier Saad Hariri for him and his family to spend “a few days in Paris” has been viewed as French President Emmanuel Macron stepping in with deft soft power to resolve tensions between Saudi Arabia and Lebanon.

Less charitably, what Macron is really doing is giving cynical cover to the Saudi rulers for their extraordinary acts of aggression towards Lebanon and their violation of that country’s sovereignty.

Two of Hariri’s children were left in Saudi capital Riyadh while he visited France over the weekend. Were they being used as hostages by the Saudis to ensure that Hariri maintains the Saudi spin on events? Certainly, the arrangement raises suspicions, but the French president sought instead to affect a “normal” nothing-is-unusual appearance.

Lebanese President Michel Aoun last week publicly accused Saudi Arabia of holding Hariri in Riyadh against his will. Aoun said the Saudi rulers were violating international law by detaining Hariri and forcing his resignation as prime minister of Lebanon. Such acts were tantamount to aggression, said President Aoun.

Yet Macron has said nothing about Saudi interference. He has instead turned reality on its head by censuring Iran for regional “aggression” and thereby backing Saudi claims that Iran is supplying ballistic missiles to Yemen. Iran swiftly condemned Macron for “stoking regional tensions”.

Credit goes to President Aoun for speaking out plainly, telling it like it is and expressing what many Lebanese citizens and many other observers around the world have concluded. The whole debacle is an outrageous affront to Lebanon and international law by the Saudi rulers, when it is taken into consideration Hariri’s hasty summoning to Saudi capital Riyadh earlier this month, his subsequent televised resignation speech on Saudi TV, and his long-delayed sojourn in that country. What is even more despicable is that the Saudi interference in the sovereign affairs of Lebanon is threatening to re-ignite a civil war within the small Mediterranean country, and, possibly worse, a war across the region with Iran.

Hariri has claimed in a later media interview, held in Saudi Arabia, and in reported communications with family and friends who are back in Lebanon, that he was not under duress while staying in Saudi Arabia. That claim beggars belief given the bizarre circumstances of Hariri’s sudden departure and his protracted nearly two-week stay in Saudi Arabia.

In any case, the president of Lebanon, Michel Aoun, has concluded that something is badly amiss in the saga, and he has explicitly accused Saudi rulers of violating his country’s sovereignty.

Therefore, if there were any principle or adherence to international law, the actions of Saudi Arabia should be condemned categorically by the international community, the UN, the European Union and France in particular owing to its historic relations with Lebanon as the former colonial power before independence in 1943.

But no. What we have instead are either shameful silence from Washington, or mealy-mouthed statements from the EU. The EU’s foreign policy chief Federica Mogherini issued a vague statement warning against “foreign interference” in the affairs of Lebanon. What kind of cowardly circumlocution is that?

Lebanon’s prime minister Saad Hariri was, in effect, detained by Saudi Arabia and forced to tender his resignation from public office as a matter of ultimatum. It has been reliably reported that the Wahhabi Saudi rulers were exasperated with the Shia group Hezbollah being part of the coalition government in Beirut. Hariri is a Saudi-sponsored Sunni politician who is antagonistic to Hezbollah and by extension, Iran. But apparently, he was not sufficiently hostile, in the view of his Saudi backers. Hence, Hariri was summoned to Riyadh and ordered to resign on November 4. (The defeat of the Saudi-sponsored covert terror war in Syria no doubt was a factor too in the timing.)

France’s President Macron is playing a particularly slippery game of pandering and expedience towards the Saudi despots.

As the Washington Post’s WorldView briefing reported last week: “French President Emmanuel Macron told reporters that it was important to dispel the implication that Hariri was a Saudi prisoner.”

The newspaper goes on to quote Macron saying rather vacuously: “We need to have leaders who are free to express themselves. It’s important that [Hariri] is able to advance the political process in his country in the coming days and weeks.”

The question should be asked: why is it important for Macron to “dispel the implication that Hariri was a Saudi prisoner”?

From virtually all accounts, including that of Lebanese President Michel Aoun whose view should surely be paramount here, that is exactly what Hariri was made by the Saudis – a prisoner.

Three days before his summoning to Riyadh and his scripted resignation speech on November 4 – in which Hariri claimed with incredible drama that he was in danger of an assassination plot by Hezbollah and its ally Iran – it was reported that Hariri was having dinner with the French culture minister in Beirut. During their meal, he received a phone call. His demeanor darkened, and immediately departed from the table for a flight to Riyadh. Without the company of aides, Hariri was met on his arrival by Saudi officials who took his mobile phone from him. He was not greeted by senior Saudi rulers like Crown Prince Mohammed bin Salman, which would have been customary diplomatic protocol.

Everything about the next two weeks of Hariri’s stay in Saudi Arabia signals a de facto detention against his will. Admittedly, he made a brief flight to the United Arab Emirates during the time period, which was claimed by the Saudis to be proof of his free movement. The UAE rulers are closely aligned with the House of Saud, and besides Hariri was soon back in his Riyadh residence, from where he continued to tweet to friends that he was “fine”.

This is nothing but a sham. The stark facts are that Saudi Arabia has brazenly interfered in the internal affairs of Lebanon, trying to force its prime minister to step down. Furthermore, the Saudi rulers have accused Lebanon of “acts of war” by allegedly supporting Houthi rebels in Yemen; the Saudis have also ordered their nationals to leave Lebanon; and there are reports emerging of the Saudis now pushing to suspend Beirut from the Arab League. This is reckless incendiary behavior by the Saudi rulers.

Should we be surprised though? Saudi Arabia has shown absolute criminal disregard for international law over its bombing and genocidal blockade of Yemen, where humanitarian aid groups have warned that 50,000 children may die this year due to enforced deprivation from the nearly three-year American and British-backed Saudi war on Yemen.

The absolute Saudi monarchy has also gone on an internal rampage of arresting its own government ministers and other businessmen in an audacious power-grab under the guise of “an anti-corruption drive”. Moreover, Saudi rulers have been instrumental in organizing a legally dubious trade and diplomatic blockade of Qatar over trumped claims that the latter is a stooge for Iran and singularly supporting terrorists (this from the Saudis who have bankrolled terrorist proxies to overthrow the government in Syria.)

The criminality and rogue conduct of Saudi Arabia is legion and brazenly in your face.

That is why the so-called “international community”, the UN, Washington, the European Union, and France in particular are deserving of withering censure. Their mealy-mouthed muted statements on Saudi misconduct towards Lebanon are a disgrace. They are complicit in wanton lawlessness by their pandering to Saudi despots.

But France’s Emmanuel Macron has emerged as the prime disgrace. His invitation to Saad Hariri and his family to come to France is a cynical move to give cover to the Saudi despots. Tellingly, on the announcement of the invitation, Macron said that “it was not an offer of exile”. That’s Macron making it all sugary nice as pie.

On Friday, the day before Hariri arrived in Paris, Macron actually accused Iran of “aggression” and has called for sanctions on Iran’s ballistic missile defense program. So, Macron, sneakily, is giving the Saudi narrative succor, and blaming Iran, instead of condemning Riyadh for its flagrant interference and aggression.

Again, by inviting Hariri to Paris, Macron is indulging the Saudi-Hariri charade that all is “normal” – when in reality the sordid shenanigans over the past two weeks amount to an outrageous and very grave violation of international law and of a neighboring country’s sovereignty by the Saudis.

With this kind of cynical “diplomacy”, Macron is showing that France is far from capable of having any leadership role or moral authority in the Middle East or the world.

Of course, France’s vested economic interests with the Saudi despots, from arms sales to energy and infrastructure projects, are central to Macron’s expedient calculations.

Macron’s ambitions of engendering some kind of renaissance of France as a global power are futile and nothing but sheer vanity. The cowardice of the French president in the face of Saudi aggression towards Lebanon shows that Macron and his pretensions of “global power” are a puff of cheap cosmetic powder. 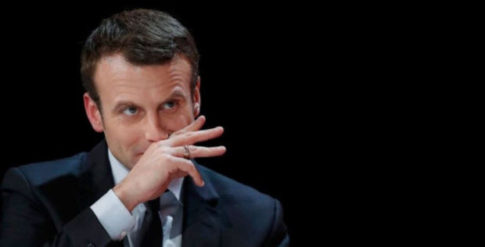