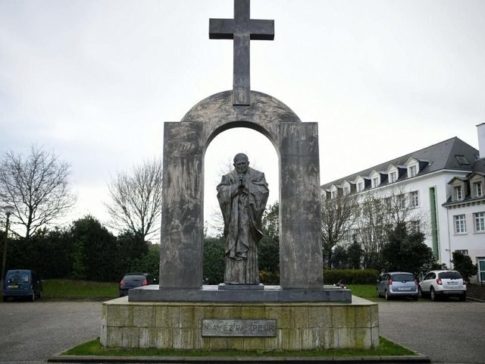 In a bizarre turn of events, the group of “free thinkers” that fought to have a cross removed from public property in northwest France is now fighting to save a mosque.

For years, the National Federation of Free Thought (FNLP) has been leading the legal battle for the removal of a monument to Pope John Paul II situated on public land in the Breton town of Ploërmel. The group proclaimed victory earlier this month when the French administrative court ordered the removal of the stone cross that surmounts the statue, saying it violated the secular nature of the state.

“Since the cross is a religious sign or emblem within the meaning of Article 28 of the Law of 9 December 1905 and its installation by the municipality does not fall into any of the exceptions provided by this article, its presence in a public location is contrary to this law,” the French court argued.

Now, however, the FNLP has come out in defense of the Muslim community of Clichy in the Parisian suburbs so they can maintain a mosque in the center of town rather than on a smaller premises outside the city center.

Taking the part of the Union of the Muslim Associations of Clichy (UAMC), the FNLP has come after the city mayor, Remi Muzeau, calling on him to reestablish the mosque in the heart of the town. The group also defended the Muslims’ right to pray out on the streets, something the mayor opposed.

Despite the FNLP’s anticlerical slogan of “No gods, no masters!”, the group’s real animus is against Christianity rather than religion in general. As one commentator has noted, the group’s true aim is not separation of Church and State but “purely and simply the disappearance of the Christian identity of France,” while at the same time defending Islam, “which enjoys a much greater tolerance from this association.”

Earlier this year, the FNLP similarly campaigned for Muslim students in Dijon, so they could receive substitute meals that respected their specific dietary practices. “As an institutional system that guarantees individual freedoms and the fundamental rights of individuals, secularism has never intended to present children with food that their families have taught them to view as unclean,” the group insisted.

Even overtly atheist groups have criticized the FNLP for its complacency toward Islam combined with a virulent hostility toward anything Christian. “Always vigilant concerning the intrusion of Catholicism into public affairs and its financing by public monies, the FNLP is much less attentive to Islam, where its reticence almost borders on muteness,” reads a statement from the site atheisme.org.

While battling against Catholic priests going about in clerical garb, the FNLP has always defended the rights of Muslim women to wear the burqa and niqab in public, the same group noted.

France has long been considered by Catholics to be “the eldest daughter of the Church,” since the nation became Christian upon the baptism of Clovis, king of the Franks, on Christmas day of the year 508 AD.

Nonetheless, if the French free thinkers are any indication, there may be more than a little truth to the saying that hostility toward Christianity is the last acceptable prejudice.