“Savers should be looking for means in which they can keep their money within instant reach and their reach only.“

– Protect Your Savings With Gold: ECB Propose End To Deposit Protection
– New ECB paper proposes ‘covered deposits’ should be replaced to allow for more flexibility
– Fear covered deposits may lead to a run on the banks
– Savers should be reminded that a bank’s word is never its bond and to reduce counterparty exposure
– Physical gold enable savers to stay out of banking system and reduce exposure to bail-ins

It is the ‘opinion of the European Central Bank‘ that the deposit protection scheme is no longer necessary:

‘covered deposits and claims under investor compensation schemes should be replaced by limited discretionary exemptions to be granted by the competent authority in order to retain a degree of flexibility.’

To translate the legalese jargon of the ECB bureaucrats this could mean that the current €100,000 (£85,000) deposit level currently protected in the event of a bail-in may soon be no more. But worry not fellow savers, as the ECB is fully aware of the uproar this may cause so they have been kind enough to propose that:

“…during a transitional period, depositors should have access to an appropriate amount of their covered deposits to cover the cost of living within five working days of a request.”

So that’s a relief, you’ll only need to wait five days for some ‘competent authority’ to deem what is an ‘appropriate amount’ of your own money for you to have access to in order eat, pay bills and get to work.

The above has been taken from an ECB paper published on 8 November 2017 entitled ‘on revisions to the Union crisis management framework’.

It’s 58 pages long, the majority of which are proposed amendments to the Union crisis management framework and the current text of the Capital Requirements Directive (CRD).

It’s pretty boring reading but there are some key snippets which should be raising a few alarms. It is evidence that once again a central bank can keep manipulating situations well beyond the likes of monetary policy. It is also a lesson for savers to diversify their assets in order to reduce their exposure to counterparty risks.

Bail-ins, who are they for?

According to the May 2016 Financial Stability Review, the EU bail-in tool is ‘welcome’ as it:

…contributes to reducing the burden on taxpayers when resolving large, systemic financial institutions and mitigates some of the moral hazard incentives associated with too-big-to-fail institutions.

As we have discussed in the past, we’re confused by the apparent separation between ‘taxpayer’ and those who have put their hard-earned cash into the bank. After all, are they not taxpayers? This doesn’t matter, believes Matthew C.Klein in the FT who recently argued that “Bail-ins are theoretically preferable because they preserve market discipline without causing undue harm to innocent people.”

Ultimately bail-ins are so central banks can keep their merry game of easy money and irresponsibility going. They have been sanctioned because rather than fix and learn from the mess of the bailouts nearly a decade ago, they have just decided to find an even bigger band-aid to patch up the system.

‘Bailouts, by contrast, are unfair and inefficient. Governments tend to do them, however, out of misplaced concern about “preserving the system”. This stokes (justified) resentment that elites care about protecting their friends more than they care about helping regular people.’ – Matthew C. Klein

But what about the regular people who have placed their money in the bank, believing they’re safe from another financial crisis? Are they not ‘innocent’ and deserving of protection?

When Klein wrote his latest on bail-ins, it was just over a week before the release of this latest ECB paper. With fairness to Klein at the time of his writing depositors with less than €100,000 in the bank were protected under the terms of the ECB covered deposit rules.

This still seemed absurd to us who thought it questionable that anyone’s money in the bank could suddenly be sanctioned for use to prop up an ailing institution. We have regularly pointed out that just because there is currently a protected level at which deposits will not be pilfered, this could change at any minute.

The latest proposed amendments suggest this is about to happen. 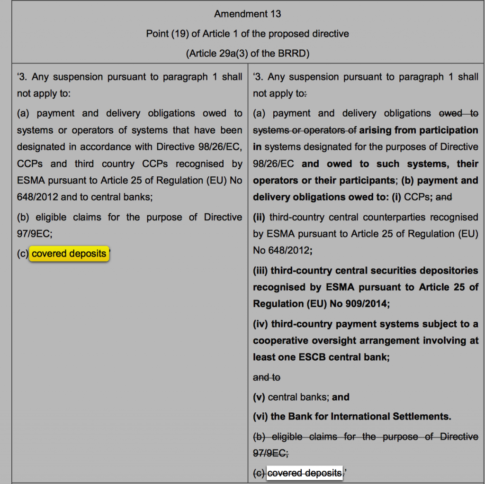 Why change the bail-in rules?

The ECB’s 58-page amendment proposal is tough going but it is about halfway through when you come across the suggestion that ‘covered deposits’ no longer need to be protected. This is determined because the ECB is concerned about a run on the failing bank:

If the failure of a bank appears to be imminent, a substantial number of covered depositors might still withdraw their funds immediately in order to ensure uninterrupted access or because they have no faith in the guarantee scheme.

This could be particularly damning for big banks and cause a further crisis of confidence in the system:

Therefore, argue the ECB the current moratorium that protects deposits could be ‘counterproductive’. (For the banks, obviously, not for the people whose money it really is:

The moratorium would therefore be counterproductive, causing a bank run instead of preventing it. Such an outcome could be detrimental to the bank’s orderly resolution, which could ultimately cause severe harm to creditors and significantly strain the deposit guarantee scheme. In addition, such an exemption could lead to a worse treatment for depositor funded banks, as the exemption needs to be factored in when determining the seriousness of the liquidity situation of the bank. Finally, any potential technical impediments may require further assessment.

The ECB instead proposes that ‘certain safeguards’ be put in place to allow restricted access to deposits…for no more than five working days. But let’s see how long that lasts for.

Therefore, an exception for covered depositors from the application of the moratorium would cast serious doubts on the overall usefulness of the tool. Instead of mandating a general exemption, the BRRD should instead include certain safeguards to protect the rights of depositors, such as clear communication on when access will be regained and a restriction of the suspension to a maximum of five working days by avoiding a cumulative use by the competent authority and the resolution authority.

Even after a year of studying and reading bail-ins I am still horrified that something like this is deemed to be preferable and fairer to other solutions, namely fixing the banking system. The bureaucrats running the EU and ECB are still blind to the pain such proposals can cause and have caused.

Look to Italy for damage prevention

At the beginning of the month, we explained how the banking meltdown in Veneto Italy destroyed 200,000 savers and 40,000 businesses.

In that same article, we outlined how exposed Italians were to the banking system. Over €31 billion of sub-retail bonds have been sold to everyday savers, investors, and pensioners. It is these bonds that will be sucked into the sinkhole each time a bank goes under.

A 2015 IMF study found that the majority of Italy’s 15 largest banks a bank rescue would ‘imply bail-in of retail investors of subordinated debt’. Only two-thirds of potential bail-ins would affect senior bond-holders, i.e. those who are most likely to be institutional investors rather than pensioners with limited funds.

Why is this the case? As we have previously explained:

Bondholders are seen as creditors. The same type of creditor that EU rules state must take responsibility for a bank’s financial failure, rather than the taxpayer. This is a bail-in scenario.

In a bail-in scenario the type of junior bonds held by the retail investors in the street is the first to take the hit. When the world’s oldest bank Monte dei Paschi di Siena collapsed ordinary people (who also happen to be taxpayers) owned €5 billion ($5.5 billion) of subordinated debt. It vanished.

Despite the biggest bail-in in history occurring within the EU, few people have paid attention and protested against such measures. A bail-in is not unique to Italy, it is possible for all those living and banking within the EU. 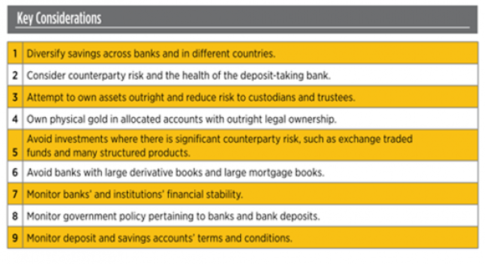 As we have seen from the EU’s response to Brexit and Catalonia, officials could not give two hoots about the grievances of its citizens. So when it comes to banking there is little point in expressing disgust in the same way. Instead, investors must take stock and assess the best way for them to protect their savings from the tyranny of central bank policy.

To refresh your memory, the ECB is proposing that in the event of a bail-in it will give you an allowance from your own savings. An allowance it will control:

“…during a transitional period, depositors should have access to an appropriate amount of their covered deposits to cover the cost of living within five working days of a request.”

Savers should be looking for means in which they can keep their money within instant reach and their reach only. At this point physical, allocated and segregated gold and silver comes to mind. This gives you outright legal ownership. There are no counterparties who can claim it is legally theirs (unlike with cash in the bank) or legislation that rules they get first dibs on it. Gold and silver are the financial insurance against bail-ins, political mismanagement, and overreaching government bodies. As each year goes by it becomes more pertinent than ever to protect yourself from such risks.