– FRENCH Mayor to be tried for inciting hatred by stating schools where Muslim students are the majority are “a problem”:

A French mayor is being charged with incitement of hatred and discrimination because he said a school with a vast majority of Muslim children is a “problem.”

Daily Caller  “In a class in the city centre in my town, 91% of the children are Muslims. Obviously, this is a problem. There are limits to tolerance,” Robert Menard said, according to France24, which sites French news channel LCI.

On the country’s first day of school in September, Menard also tweeted remorsefully of “the great replacement,” a foreboding phrase popularized by French writer Renaud Camus that references the belief that Muslim immigrants are gradually colonizing France.

“I just described the situation in my town,” Menard, mayor of Béziers, told Agence France-Presse (AFP), according to France24.

Menard has stirred controversy before when he reportedly placed anti-migrant posters around his town in October just before the arrival of refugees.

The notices were titled “That’s It, They’re Coming,” with a depiction of crowds of male migrants outside the famous cathedral in Beziers, reports BBC.

Menard, a former journalist, is an ally to the anti-immigrant and National Front party, which is currently led by French nationalist Marine Le Pen.(below) 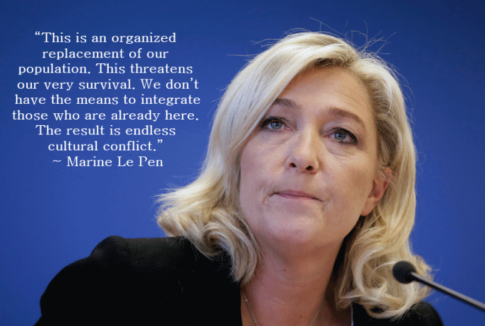 The solution presented by people on the Left is to give in. Let Muslims be Muslims in our nations. Let Islam be Islam. If anything, they believe we should let even more Muslims in, as that will somehow increase the Muslims tolerance of us.

Buchanan Europe has survived depression and the worst wars in modern history, though her wounds are terrible and lasting. But can Europe, with native-born populations that are aging, shrinking, and dying, survive a never-ending invasion of Third World peoples that Europe has never assimilated before? Especially when millions of these people profess a militant faith that has historically been alien and hostile to Europe?

The birth dearth in Europe has endured for 40 years. There is no end in sight to the Third World invasion, as the lands of the Middle East and sub-Sahara descend ever more deeply into tribal, sectarian and civil war, and send new millions of refugees streaming toward the Mediterranean coast.

Who or what will stop them? As Gen. Petraeus said on that road to Baghdad: “Tell me how this ends.”