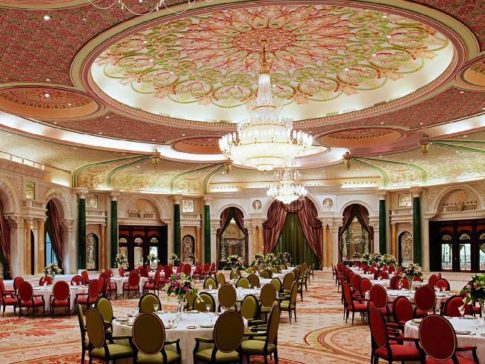 – The opulent Ritz-Carlton Riyadh becomes prison for dozens of Saudi princes and dignitaries:

FINE dining, a world-class spa and every luxury you can imagine. If this is what going to jail is like, where can we sign up?

HUNDREDS of guests at one of the world’s most luxurious resorts have been booted from their hotel rooms to make way for what is arguably the most pampered collection of prisoners in modern history.

The group reportedly includes military officials and government ministers as well as 11 princes — among them Prince Alwaleed bin Talal whose US$10 billion fortune makes him the 10th richest man on the planet.

Construction tycoon Bakr Bin Laden, billionaire Saleh Kamal and Waleed al-Ibrahim, owner of the influential Arab satellite network MBC, are also believed to be in detention at the hotel.

According to The Guardian, The Ritz’s paying guests were told to leave their rooms, walk away from their dinners and leave their mocktails at the bar at around 11pm on Saturday.

They were herded into the lobby with their baggage and whisked off to other hotels in the hotel in the Saudi Arabian capital.

The scenes were described in a somewhat gleeful account by former News Corp journalist Martin Chulov: “From midnight, buses arrived in the sprawling complex disgorging princes, business leaders, other royals, their guards and their captors,” he wrote.

“The arrivals marked the start of an extraordinary episode that exposed the kingdom’s elite to rare public scrutiny and showed that, even when accused of high crime, the powerful maintain privileges.

“By dawn on Sunday, more than 30 of Saudi Arabia’s most senior figures, among them blood relatives of senior rulers, were locked inside the hotel, accused of corruption.

“Their ignominious arrests were the talk of the country, and so too was the fact that they were far from a prison cell, where most citizens facing similar charges could expect to find themselves.”