In what was otherwise a mediocre jobs report, in which the establishment survey reported that a lower than expected 261K jobs were added to the post-Hurricane economy, the biggest surprise was not in the Establishment survey, but the household, where the unemployment rate tumbled once more, sliding to a new cycle low of 4.1%, for all the wrong reasons, because a quick look at the participation rate metrics showed that in October there was a sharp decline, with the labor force part. rate sliding from 63.1% to 62.7%, back to 4 decade lows… 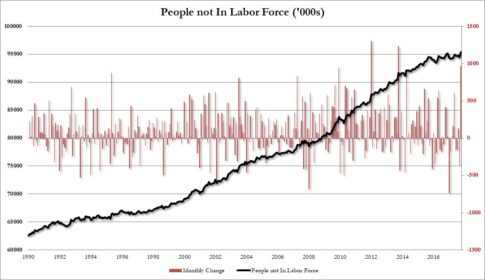 So much for economist hopes that potential workers from the fringes are coming back to the labor force. Of course, the implication is even worse: with more slack being created in the form of workers who are leaving, not entering, the labor force, this creates a buffer for wage growth, and suggests that any hope for rapidly rising wages has once again been derailed.