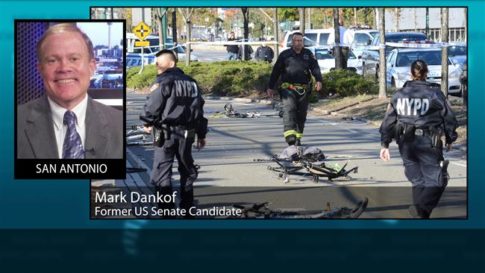 – ISIL was created by US, Israel, Saudi Arabia: Analyst:

US President Donald Trump must recognize that the United States, along with Israel and Saudi Arabia, created the Daesh (ISIL) terrorist group in the Middle East to wreak havoc in the region, just as they created al-Qaida in an earlier era, a former US Senate candidate says.

“The CIA needs to spend more time investigating terrorists and a lot less time recruiting them and financing them. The United States and Israel, and secondarily Saudi Arabia, have created the very monsters that they are decrying,” said Mark Dankof, who is also a broadcaster and pastor in San Antonio, Texas.

On Friday, US President Donald Trump said ISIL will pay a “big price” for every attack it carries out in the United States, following the New York truck attack by an alleged ISIL loyalist.

“They will pay a big price for every attack on us!” he wrote on Twitter.

On Tuesday, a 29-year-old Uzbek man rammed a truck into cyclists and pedestrians in New York City, killing at least eight people and injuring 12 others. Authorities swiftly branded the attack an “act of terrorism.”

The US claims to be fighting ISIL in several countries but critics say the American government and its allies have encouraged the spread of Daesh in the Middle East to create a perpetual war in the region and advance the US military-industrial complex.

“The Unites States that can essentially pull the rug out of the extremist groups and stopping the supporting for them logistically, militarily and financially supporting stable governments in the Middle East, getting out of the regime change business, getting out of the arms-selling business and first and foremost insisting that Netanyahu has to come to a legitimate agreement with the Palestinians as a prelude to any significant peace,” Dankof added.

“Until Trump does those things, and leads the American government and the American people in that direction, there is going to be nothing but death and destruction ahead keeping in mind once again that the United States has created the very monster of now claims to be destroyed,” he concluded.

“Does pleading allegiance to an organisation created covertly by US secret organisations mean you’re totally brainless or a patsy or both?”

1 thought on “ISIS/ISIL was created by US, Israel, Saudi Arabia: Analyst”