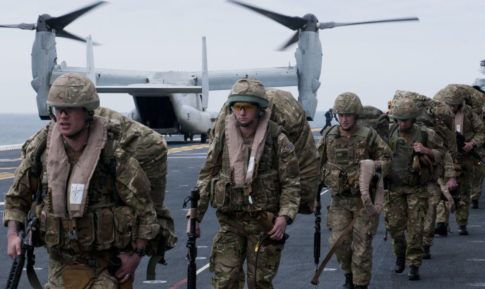 Over the course of the summer there was great fanfare and much to do from the British Secretary of State, Sir Michael Fallon MP, regarding the ‘completion’ of two new British aircraft carriers called HMS Queen Elizabeth and HMS Prince of Wales. Fallon, a thoroughly odious English Tory and old Cold War warrior, got punch drunk and completely giddy with the unveiling of the new aircraft carriers. Fallon got so excited he started spouting the most ridiculous anti-Russian nonsense such as this contrasting the Royal Navy’s new 65,000-ton carrier with what he called the “dilapidated” Russian carrier Admiral Kuznetsov. Fallon went on in wild Cold War terminology to invoke the spectre of what he erroneously and egregiously called ‘Russian aggression’ and absurdly claimed that the mighty Russian Federation was some how ‘jealous’ of Britain’s two new aircraft carriers. Quite frankly, there is not much to be jealous about when one scratches beneath the Tory English anti- Russian surface.

As is so often the case with the English, in particular their most offensive incarnation in the form of the Tory Party, what the English say and what the reality of the situation is, the hard cold truth, are two very different matters that rarely, if ever, gel together. Fallon quoted the former British Prime Minister Margaret Thatcher [who actually had tremendous respect and admiration for and a very good working relationship with the last General Secretary of the Soviet Union Mikhail Gorbachev] in trying to whip up stupid and offensive anti-Russian Cold War sentiment. Well, I am reminded of another one of Mrs Thatcher’s great quotations which I am fond of throwing back in ugly English Tory faces: ‘Such is presentation……how different from reality.’

Fallon would not countenance any criticism of the new aircraft carriers, their cost, their Ministry of Defence project management, their sea readiness, their utility, and a whole host of other salient issues which deserved scrutiny by snapping that critics should ‘shut up.’ I’m sorry Fallon but the last time I checked the UK was supposedly a free liberal democracy with intellectual freedom and freedom of speech. Not some Gestapo State as your colleague Mrs May has attempted to create.

So let us examine closely how brilliant and what a great investment these two new British aircraft carriers are. Both HMS Queen Elizabeth and HMS Prince of Wales have roughly cost the hard pressed, almost bankrupt UK taxpayer a combined 6 Billion Pounds. At the official launch of HMS Queen Elizabeth back in the summer Fallon boasted: ‘But Queen Elizabeth, the biggest and the greatest warship this country has ever built, will go on now from these trials to defend our country, to safeguard our sea lanes, to work with our allies and partners to keep the peace, and to save lives across all seven seas.’ When pressed on what he would say to the ‘armchair critics’, Fallon beat his meagre chest and said ‘They should come and see this wonderful flagship of the Royal Navy, which will help keep this country safe for 50 years to come.’ Not to leave any hostages to fortune and most certainly not to be modest Fallon went on: ‘This is a great day for Britain. There are only three other countries in the world building aircraft carriers – and we are building two.’

Let us blow away the Fallon/Tory/English spin and Rule Britannia hyperbole and examine the truth. While on a tour of the Royal Navy’s mighty new aircraft carrier HMS Queen Elizabeth, an intrepid journalist noticed that it is fitted with the exact same software that was hit by a massive cyber-attack only a few months ago. HMS Queen Elizabeth is the most expensive aircraft carrier ever to be built for the Royal Navy at over 3 Billion Pounds but it is running on the same IT software system used by the NHS that were targeted by cyber hackers earlier this year. Also HMS Queen Elizabeth is designed to house 36 fast jets. None of which have yet been built. What is the point of an aircraft carrier if there are no aircraft to land on it? As Jeremy Clarkson writing in The Sun put it: ‘Apparently, three of the Anglo-American F-35s will be delivered to the Navy in 2020, then six more the following year. Quite what the crew is supposed to do to defend itself in the meantime is unclear. Use rude gestures, perhaps?’

And there is the small matter about the usual serial incompetence of the utterly corrupt and incompetent UK Ministry of Defence and its budget planning and project planning when it came to the building and budgeting for HMS Queen Elizabeth and HMS Prince of Wales. The Ministry of Defence as usual can not organise a tea party in China. Thanks to these two new aircraft carriers there is now a massive 30 Billion Pound black hole in the UK Ministry of Defence’s budget. Several senior Ministry of Defence officials linked to UK defence procurement have in recent weeks resigned while the Ministry of Defence has now had to engage in a behind the scenes, classic Whitehall cover up cost cutting exercise. The sacrificial lamb for plugging this massive financial black hole so Britain can have two utterly useless, good for nothing, football stadium aircraft carriers without any aircraft will be the Royal Marines and their beach landing ships HMS Albion and HMS Bulwark. Churchill would be turning in his grave if he knew that Britain was sacrificing her ability to ‘fight them on the beaches’ so Michael Fallon can swan around spouting rubbish about how Russia is ‘jealous’ of these aircraft carriers and more anti-Russian garbage about how: ‘the resurgence of Russian aggression abroad…[is] undermining democracy wherever it can” and how these aircraft carriers represent ‘90% of it – British – 17 million parts. This ship is a floating showcase for British industry, British talent, British skills and British brainpower.’

Fallon is not the only one spouting absolute lies and anti-Russian rubbish about these aircraft carriers. Sadly, a very weak naive former colleague of mine from the virulently anti-Russian Henry Jackson Society has been getting into Twitter spat after Twitter spat against RT defending these British aircraft carrier pieces of garbage. When will the anti-Russian propaganda of Fallon and James Rogers of the Henry Jackson Society stop. If it were not for the superior strength, grit, determination, continuous effort and heroic courage of the Russian people exemplified most vividly during the Battle of Stalingrad the simple fact is the UK would be the smallest province in the Nazi Third Reich now. But then Rogers is not an academically professionally trained historian. Perhaps some people need to go back to university and do a history degree.