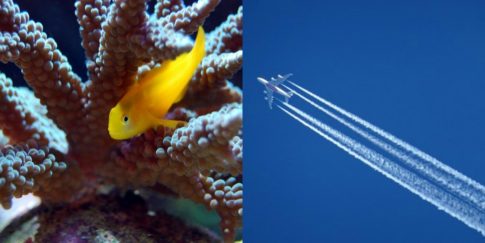 Using computer models to predict temperatures and coral activity from 2020 to 2069, they decided that their proposed solution is the best to drop temperatures and keep coral populations. Additionally, the idea of sulfate injection into the atmosphere to control hurricanes has been bandied about.

Their theory of bleached corals is that when the sea is too warm, corals expel the tiny algae living in their tissues, which are supposed to feed them through photosynthesis. But then the corals turn white and starve to death. So basically, the researchers have a one-track mind to simply keep temperatures down.

However, there are a few problems with this intent.

Number one, a strategy of this magnitude could have a dramatically ill effect on the entire ecology, especially if it is disrupting a natural ebb and flow of nature. Number two – the elephant in the room – geoengineering has already been happening for about two decades with heavy metal and aluminum nanoparticles emanating throughout the sky through jet “chemtrails.” They linger and disperse for hours and hours longer than the contrails of yesterday. Yet, we are constantly told it is not happening. On the other hand, we are told that in the future, geoengineering could help cool the Earth (yet it is already happening and seems to correlate with rising temperatures). Instead of having the desired light detracting effect, the form of geoengineering taking place right now actually makes people feel like they are living in a convection oven although light may indeed be deflected away.

Therefore, the third problem with their model is that they left out this huge variable of the current geoengineering and its real-time, artificial effect on weather and visible sunlight. Some people blame the last two decades of geoengineering for actually causing the coral reef bleaching via Solar Radiation Mining and the possibility that it starves algae and consequently chokes out corals, fish, etc. This writer honestly doesn’t know – but if that’s true, we would need to acknowledge the current effects of “global dimming.”

Sadly, the New Scientist article devolved into a circus of solutions and theories that look as though they were meant to gear the reader to the original geoengineering solution.

Some of those interviewed had “less extreme” solutions to help the coral, but they still involved altering the ecology through injecting tiny bubbles into the ocean or seeding existing clouds to make them brighter.

On the other hand, a Harvard professor appeared at first to protest geoengineering by saying that solar radiation management has side effects. For example, “it could disrupt regional weather patterns and monsoons” which would dramatically throw off predictable farming patterns. However, he toppled his own argument by then saying that terrorists could stop the process and then the “benefits” of the geoengineering would be lost. (Which is it, Professor – would geoengineering benefit the ocean or not?) This ridiculous, fantastical argument only serves to support an extreme geoengineering measure – there was no true discourse in the article.

Crabbe admits that “we don’t know… what would happen to the marine environment” in that scenario. “But the situation is currently so extreme that we have to make provisions.”

Urgency is the most common battle-cry of modern scientists, “Don’t just think this through, do something NOW.”

“I had to pinch myself after reading this.”