After free passage negotiations with the U.S. and its Kurdish proxy forces, ISIS is moving its fighters out of Raqqa city. When the Syrian government reached similar agreements the U.S. childishly criticized it. The U.S. coalition claims that it was “not involved in the discussions” that led to the Raqqa free passage agreement. A BBC News report shows that the opposite is true. 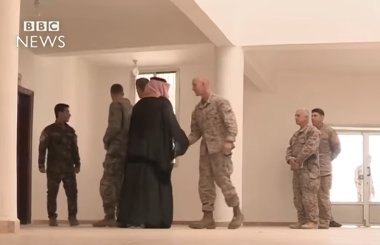 Over the last two years the U.S. and its Kurdish proxy force in Syria made several deals with the Islamic State. In 2016, for example, they negotiated a deal with Islamic State fighters to move from Manbij to the Turkish border to avoid further casualties in the fight about the city.

But when in August 2017 Hizbullah and the Lebanese and Syrian government negotiated a deal with some 300 besieged ISIS fighters and their families at the Lebanese-Syria border, the U.S. loudly protested. The U.S. military blocked and threatened to bomb the evacuation convoy over several days and the U.S. envoy McGurk ranted against it:

7:20 AM – 30 Aug 2017 – Brett McGurk @brett_mcgurkIrreconcilable #ISIS terrorists should be killed on the battlefield, not bused across #Syria to the Iraqi border without #Iraq’s consent 1/2
Our @coalition will help ensure that these terrorists can never enter #Iraq or escape from what remains of their dwindling “caliphate.” 2/2

Over the last months U.S. supported Kurdish proxy fighters besieged the city of Raqqa and fought to take it from ISIS. An immense amount of U.S. bombs was released to lower the casualty numbers of the U.S.proxy forces. The city was literally “destroyed to save it”. Many of its civilian inhabitants were killed. During the last days rumors abounded that a deal was made between the U.S. and ISIS. It would give ISIS fighters free passage when leaving the city. Today these rumors were confirmed:

[SOHR] received information from Knowledgeable and independent sources confirming reaching a deal between the International Coalition and the Syria Democratic Forces in one hand; and the “Islamic State” organization in the other hand, and the deal stated the exit of the remaining members of the “Islamic State” organization out of Al-Raqqah city.The Syrian Observatory for Human Rights confirms that this agreement has happened, and confirms that all the Syrian members were gotten out already, and if some members remained until now it is because they are of the non-Syrian nationalities of whom the French Intelligence objects getting them out of Al-Raqqah city, where the French Intelligence considers that some of those involved in Paris Attack are present inside the city …

Other sources said that buses had arrived to take the leaving ISIS fighters towards the Syrian-Iraqi border area. Local officials say that foreign fighters with ISIS are also leaving. The U.S. coalition generally confirms the evacuation, but it denies any involvement:

A convoy of vehicles is staged to depart Raqqah Oct. 14 under an arrangement brokered by the Raqqah Civil Council and local Arab tribal elders Oct. 12.
…
The Coalition was not involved in the discussions that led to the arrangement, but believes it will save innocent lives and allow Syrian Democratic Forces and the Coalition to focus on defeating Daesh terrorists in Raqqah with less risk of civilian casualties.

The hypocrisy stinks to high heaven. A deal made by Hizbullah with besieged ISIS fighters and their families was condemned. The evacuation convoy was blocked for days in the desert by U.S. drones and air interdiction.

Now the U.S. and its allies make a similar deal and let ISIS leave its besieged position. They bus those fighters towards the Syrian-Iraqi border where Syrian government forces are engaged in heavy battles against ISIS.

What is next? CENTCOM providing ISIS with air transport to the Israeli border? There ISIS is free to openly train new forces. The area is safe from Syrian and Russian attacks. The Israeli airforce keeps anyone away who might be hostile to ISIS.

The U.S. says: “The Coalition was not involved in the discussions”. That is a lie. Only two days ago BBC News reported on the meeting where the deal was discussed and then made. Here you can see (vid) U.S. General Jim Glynn meeting on October 12 with Raqqa officials to negotiate the deal. While the General claimed at that time that no deal was made, later news and the situation today proves the opposite. ISIS convoys are moving out of Raqqa and the U.S. and its proxy forces are sitting tight and simply watch them leave. No U.S. air asset is blocking the convoy and no Brett McGurk is raving against the deal.

The criticism of the Hizbullah deal in August by the U.S. military was unprofessional. The blockade of the earlier evacuation convoy was childish behavior. McGurks rants were puerile. To lie today about involvement in the deal making after having invited the BBC to film the negotiations is just utterly stupid. No grown-ups seem to be involved on the U.S. side of the Syria conflict.