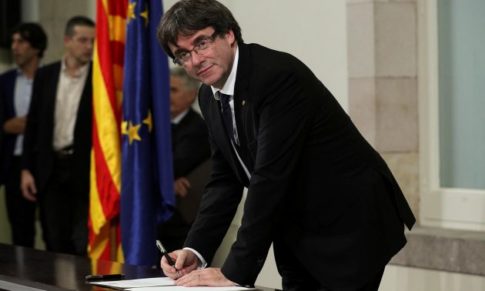 Call it theatre of the absurd – with a lethal subtext. Under pressure from all corners – even Donald Tusk, president of the EU Council – in his fateful date with destiny Carles Puigdemont, President of Catalonia, came up with some last-minute judo dialectics. He issued a non-denial denial Unilateral Declaration of Independence from Spain. What was declared was immediately suspended; the Republic of Catalonia lasted for six seconds.

The deft political gambit left Madrid predictably bewildered. Prime Minister Mariano Rajoy, a.k.a. nano-Franco, issued an ultimatum; you have five days to say if you declared independence or not.

Independent of the answer, Madrid’s nuclear option remains on the cards; infamous article 155 of the Constitution, which calls for the suspension of Catalonia’s government and parliament from six to 12 months.

Yet that may come with a twist; a 155 in slow motion, parallel to the hazy offer of starting a process, in six months maximum, leading to Spanish constitutional reform. Madrid needs Catalonia for this reform to succeed. So, essentially, Puigdemont just needs to say “no” for the train to start rolling.

It’s way more complex than it seems. The Catalan extreme left, up to the last minute, was trying to convince Puigdemont to proclaim unconditional independence. At the same time, those six seconds left Catalan unionists predictably furious. Moderates for their part prefer to see a faint light at the end of the tunnel.

The problem is that even with discreet back channels in place, Madrid’s strategy is to ultimately force a fissure in the independentist coalition; secession inside Catalonia to prevent secession from Spain. So far, the fissure has been prevented by some members of the Catalonian Parliament signing a declaration of support for the – still non-existent – republic.

The President of the Cantabria region, Miguel Ángel Revilla, sums it all up: Rajoy is to blame. Revilla worries that “50% of Catalans want to leave Spain. Four years ago, that was not the case.” He stresses how a “Catalan statute – approved by the Catalans and the Spanish Parliament – was impugned by the Constitutional court, so they had to be mad, right? It did not deal with independence, it was a pact, delineating a series of obligations.”

So the unwillingness of the Spanish government to talk, according to Revilla, is what led to the current impasse. No wonder; Rajoy is closely advised by former Prime Minister José María Aznar.

The extremely reactionary administration in place in Madrid could have defused the bomb even before the referendum, by mobilizing sectors of the working class in Catalonia whose first language is Spanish, not Catalan; many of these view the independence dossier as a “war of the elites”.

Madrid though opted for Franco-ist repression tactics. King Felipe VI had one chance to appeal for calm and reunite the nation; he chose to play Scaremonger-in-Chief. EU “leaders” stuck to platitudes, like Rothschild favorite Emmanuel Macron extolling his “profound” vision of an integrated Europe and Chancellor Angela Merkel abdicating from her role of Dispenser of Wisdom; after all, this is not Crimea.

The European Commission (EC), losing the scarce credibility it still possessed, sharply ignored its own “core values”; the rights of national minorities enshrined in Article 2 of the EU founding treaty, as well as Article 21 of its charter of fundamental rights.

Podemos has some decent ideas to “save Spanish democracy”.

Yet there seems to be only one sensible road map ahead.

None of this seems to be on the cards – and that’s why the real tragedy is only beginning. Spain is already broken – and there will be no turning back.

The temptation to strike parallels with Europe a century ago are strong. What about adapting Rosa Luxemburg’s latest, searing essay before she was assassinated in January 1919; “You stupid henchmen! Your ‘order’ is built on sand.” At the same time Rosa Luxemburg warned the Left about the petty-bourgeois nationalisms emerging after the collapse of the Habsburgs (the exception was Czechoslovakia.)

“Catalanism” – which sprang up in the 19th century – is a different beast though. The Barcelona-Madrid fissure is based on deep economic/fiscal reasons, amplified by the dire consequences of the financial crisis in Spain since 2008. Catalonia’s nationalism is not narrow-minded but inclusive, largely open to The Other – from other parts of Spain and abroad.

The intractability of the political problem is that Catalonia – the most European of all Spanish regions and historically in favor of republicanism and federalism – contests the very essence of the Spanish system. To scrap this outdated constitution – written immediately after Franco’s demise and drenched in amnesty for Franco-ists – is as important as self-determination. To say that the Bourbons face a legitimacy crisis is a major understatement.

Madrid’s actions on Referendum Repression Day – led by a Franco-ist partisan of torture, infamous General Bum-Bum – could not but revive the memory of Catalonia as the key anarchist/republican hub during the Spanish Civil War; the Civil Guard in itself represents the memory of Francoism. It’s understandable how separatists prefer to discard the historic/ financial heavy load when they see the impossibility of a true modernization of Spain.

The prospect of an implosion of this current Spanish state – with repercussions everywhere from the Basque country to Scotland –   should be driving Europeans east and west to think hard about all the interconnections between city, territory, nation, state and (European) union; a healthy exercise in political economy thinking.

Instead, once again, we have total Brussels paralysis. There’s no plan B. Worse; there’s no political will, as some Greens at the European Parliament have remarked. No wonder, with EU “leaders” as mediocre as the Juncker/Tusk bunch, and the number two of the EC, Dutch jurist Frans Timmermans, saying that “sometimes the rule of law must be preserved by a proportionate use of force.”

Brussels, facing the prospect of a region that may leave in one go not only the EU but also the euro, is incapable to see that the Spanish fracture is a microcosm of the nation-state fracture inside the EU. The Juncker/Tusk unconditional support for nano-Franco cannot but be interpreted all across progressive European circles for what it is; what good could possibly emerge out of “mediation” by these non-entities? It’s civil society, in tandem, in Spain and Catalonia, that should be the mediators. One wonders if they’re up to the task.