– The Consent of the Conned:

Every single line item in our entire Bernie Madoff scam of a system is cooked.

My theme this week is The Great Unraveling, by which I mean the unraveling of our social-political-economic system of hierarchical, centralized power. Let’s start by looking at how the basis of governance has transmogrified from consent of the governed to consent of the conned.

In effect, our leadership leads by lying. As we know, when it gets serious, you have to lie to preserve the perquisites and power of those atop the wealth-power pyramid, and well, it’s serious all the time now, so lies are the default setting of the entire status quo.

But all too many of us are willing to accept the lies because they’re what we want to hear.

The story of scams such as Bernie Madoff’s isn’t that canny Bernie victimized helpless wealthy people; the untold story is that all those “victims” wanted to believe that something that was obviously too good to be true–incredibly high returns, logged month after month and year after year like clockwork–was in fact true because their greed made them more than just vulnerable to being scammed–they wanted to be bamboozled by Bernie.

Victims of scams naturally deny their own culpability. It’s extremely uncomfortable to admit that greed didn’t just blind us to a patently impossible yield; we wanted to be conned because it felt so wonderful to believe we richly deserved unearned wealth.

All wealth is “earned” to those doing the skimming. The greatest con machine of all time, Wall Street, judiciously refers to every skim and scam as “earnings.”

And so the “victims” blame our lying leaders for telling them what they want to hear. You see how the webs of self-interest reinforce each other: those atop the wealth-power pyramid secure their position by lying persuasively enough to gain The Consent of the Conned–those who give their consent to a visibly corrupt and unsustainable status quo because that status quo is promising to provide too good to be true goodies.

In other words, the lies are constantly compounding: the leadership lies to themselves– we have to lie to keep everything glued together for the good of the people–when their real motivation is to keep the system glued together because the system gives them wealth and power.

If we can be honest for a moment, we might admit that representational democracy encourages leaders to issue too good to be true promises because those promises win votes.

Those on the bottom of the wealth-power pyramid accept the too good to be true assurances because that’s exactly want we want to hear: that we all deserve a piece of the unearned wealth that, like Bernie Madoff’s painfully impossible scam, flows in permanent abundance via some sort of financial magic.

The books are cooked, people; we embrace a gigantic too good to be true Bernie Madoff scam of a system because it’s what we want to believe and what we want to hear. Then, when the whole phantom-wealth con collapses in a heap, we quickly pull on the tattered cloak of victimhood: we were promised, we were lied to, we trusted our leaders to lead us wisely, and so on, as if the con wasn’t obvious to anyone who was skeptical of too good to be true claims.

Now that the whole Bernie Madoff scam of a system is unraveling, two self-reinforcing dynamics are in play: our leadership, elected and unelected alike, are doubling down on the lies because there is no alternative–TINA. What does a liar gain by confessing the whole prosperity thing is illusory, and darn it, we can only spend what we produce in real-world surplus? Short answer: nothing, because that’s not going to win elections or gain the consent of the governed.

So lies are piled on lies to the point of absurdity. But just as Bernie Madoff’s wealthy marks ignored the warnings of the skeptical and mounting evidence that they were being conned, the electorate wants to believe the magical thinking is real, and so they accept the latest statistical flim-flammery as “proof” that the con is not a con.

Once again, we worship the Goddess TINA–there is no alternative. Just as our leaders are now trapped in their web of lies and false assurances, the governed are also trapped in the con because it’s too painful and unnerving to admit we’ve willingly bought into a complete con: we’re too smart to be conned, we protest; look, it’s not a con, the GDP is growing and unemployment is low–and so on.

Bernie Madoff’s marks made the same defensive protests: it can’t be a con, look at my statement: the monthly “earnings” keep pouring in.

Every single line item in our entire Bernie Madoff scam of a system is cooked. Wanting to believe a con is true doesn’t make it true. The power of a con rests in our great desire to believe that what’s too good to be true is magically true. It isn’t, but it feel so reassuring and, well, deserved for it to be true.

It’s tempting to blame our leadership for perpetrating this systemic con, but every con requires marks who are willing to accept that what’s too good to be true is magically true. 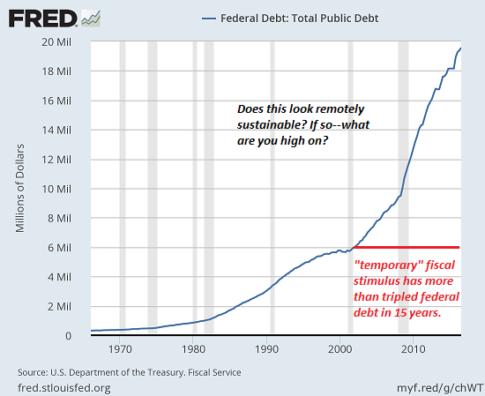