Statins on the other hand are toxic poison. 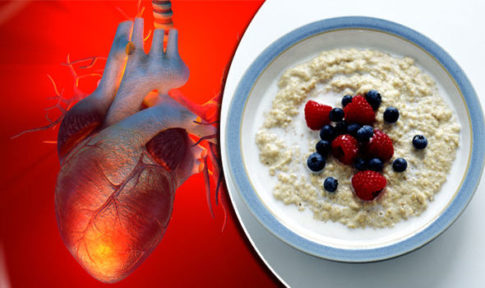 Heart disease symptoms could be warded off most effectively by eating a bowl of porridge everyday, says an expert.

The popular winter breakfast dish is made from oats, which is the key ingredient for a healthy heart.

Oats contain soluble fibre, also known as beta glucan, which have been found by studies to lower cholesterol levels.

Cholesterol – while important for the normal functioning of the body – can be a problem if you have too much of it in your blood, increasing your risk of heart disease, according to the British Heart Foundation.

When it reaches the gut, the beta gluten in the porridge forms a thick gel.

It then works to reduce the absorption of cholesterol as well as boost the excretion of bile salts.

This means that there is consequently a reduction in cholesterol circulating in the blood.

Research has found consuming 3g of beta gluten a day – roughly the amount in a 70g bowl of oats – can reduce levels of ‘bad’ LDL cholesterol.“That’s similar to the results you might get from taking a statin,” said Dr George Grimble, from University College London, to MailOnline.

Statins are a group of medicines which can help lower ‘bad’ cholesterol in the blood and are prescribed to those who have, or are at risk of, heart disease.

However, they do have side-effects including nosebleeds, sore throat, headache, constipation, muscle and joint pain and increased risk of diabetes, according to the NHS.

Porridge, on the other hand, only appears to have benefits it seems.In addition to lowering cholesterol, it can help with weight loss. The thick gel the beta gluten creates in the gut contributes to a feeling of fullness.

Oats are also naturally low in fat and contain manganese, copper and iron, as well as B vitamins.

What’s more, Dr Grimble also told MailOnline: “Beta glucan forms acids, including butyric acid which works on the DNA of cells in the colon and has an anti-cancer effect.”

2 thoughts on “75p breakfast better than drugs to lower cholesterol”