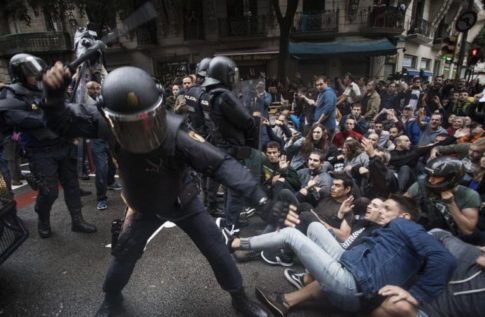 When it comes to great leaps in human progress, a crucial component to lasting change is convincing enough people that a particular way of organizing human affairs is outdated and harmful. I think if we take a step back and look at how people are governed across the world, there are very few places where “the people” feel they live in societies in which they exert any sort of genuine political self-determination. When we look at the last few decades of political governance in the Western world, a march toward more and more centralized political power has been a facet of life in both the U.S and Europe. I believe this trend is being pushed to its breaking point, and groups of humans with common culture, language and interests will increasingly question whether massive nation-states (or wannabe super states like the EU) make sense. In the past five years alone, Scotland held a referendum on UK membership, Great Britain voted to leave the EU, and most recently, Catalonia took a major step toward independence with yesterday’s banned referendum.

Those who favor centralized power see these events and movements toward decentralized political power as inconvenient, intransigent outbursts from the ungrateful, unwashed masses. Movements which would best put down one way or the other in order to carry on with the business of further centralizing power. They view such burgeoning drives for political self-determination as temporary storms which the wise elders of centralization must merely ride out. Unfortunately for them, this is not the case.

If anything, we can expect many more movements for decentralized power in the decades ahead for two main reasons. First, the current system is simply not working for most people. Second, as we become more connected and conscious, we will invariably conclude that all human beings deserve to have a real choice in the type of governments they live under. The prevailing assumption that we’re simply born into a particular nation-state and must accept this situation for the rest of our days irrespective of how brutal, oppressive and dysfunctional it may be, is an irrational, inhumane and outdated perspective.

As things stand today, humans essentially have two choices when it comes to political life. We either accept the nation-state we’re born into and play the game to the best of our advantage, or we try to become citizens of another country with values that more align with our own. The only way to really shatter existing political power structures and form new ones is through violent revolution or war, which is an insane way of reorganizing matters of human governance. One of Spanish Prime Minister Mariano Rajoy’s key arguments in casting the Catalan referendum as illegal is that Spain is an indivisible nation under the 1978 constitution. Let’s think about what this means in practice.

Anyone who’s spent any time in Spain understands how culturally and linguistically distinct many of the regions are when compared to Madrid. These are differences that go back centuries and can’t be brushed off by a constitution created a few decades ago. The idea that these various regions must be part of a centralized Spain even if the people within the regions want political autonomy is ethically preposterous, as well as authoritarian and evil in every sense of the word. If done properly, human governance should always be a voluntary arrangement. If an overwhelming majority of culturally distinct people within any nation-state decide the super state is no longer working for them, they should have every right to leave. Anything else is bondage.

As the U.S. Declaration of Independence so eloquently states:

We hold these truths to be self-evident, that all men are created equal, that they are endowed by their Creator with certain unalienable Rights, that among these are Life, Liberty and the pursuit of Happiness.

That to secure these rights, Governments are instituted among Men, deriving their just powers from the consent of the governed, That whenever any Form of Government becomes destructive of these ends, it is the Right of the People to alter or to abolish it, and to institute new Government, laying its foundation on such principles and organizing its powers in such form, as to them shall seem most likely to effect their Safety and Happiness.

The key aspect of the above declaration is that governments instituted among humans derive their powers from the consent of the governed. If we take the U.S. as an example, how do we know that the people of Texas and California believe centralized power in Washington D.C. as it stands today is an appropriate form of governance unless there’s a periodic vote confirming it? Did any of the 50 states ever actually consent to an out of control centralized deep state-run oligarchy running things as they please? Likewise, how do we know that the people of Catalonia consent to being part of Spain unless you ask them? The truth is you don’t, and this presents a major dilemma we must confront going forward.

If we look at the world’s nation-states, they generally consist of large, centralized political entities comprised of a union of culturally distinct provinces, states or regions. In some cases these regions voluntarily came together over time, while in other cases they were forced together during a war or revolution. It’s crucial that we not view such nation-states as Rajoy views them, as eternal structures that can never be altered, but rather as voluntary political associations. Again, the only way to know such associations are truly voluntary is to periodically subject them to referendums. It seems to me that this should be an integral part of any nation-state. In contrast, we have a name for power relationships that aren’t voluntary. Slavery.

Indeed, the fact that we put up with this at all is downright perplexing. For example, although we accept children should be under the care of parents from birth up to a certain point, at a certain age we pretty much all agree that an adult should be free to make autonomous decisions. While a human becomes free at this micro level upon reaching a certain age, at the macro level most human beings never get to choose what sort of government they live under. Most of us are not at all governed by consent, and this feels very wrong to me.

Beyond the ethical implications of imposed political governance, we should also discuss the way our current system ends up functioning in practice. If power hungry authoritarians understand that the bond which unites the various regions of a nation-state can never be questioned, power dynamics become very lopsided and increasingly centralized over time. In contrast, lets imagine that every 25 years, every defined region of every nation-state gets to vote on whether they want to stay part of the current governing structure or create a new one. Power might be much more distributed in the interim period under such a system, since there’s always a threat that one or many of the various states or provinces might choose to sever ties in a few short years. Such a system would be much more akin to a free market for political governance versus what we have today, which appears more in-line with a “divine right of kings,” feudal type system. I think we can do much better than this.

That being said, I don’t want anyone to assume that the hypothetical system I described above is what I think should happen. I’m just providing an extremely simplistic example to get people thinking. The key point is human beings should not be forced to live their entire lives under systems of involuntary political governance which they never agreed to in the first place.

We must figure out a way for human beings to peacefully and periodically alter the forms of government they live under in a major way should they choose to. Right now, the main options for achieving this sort of change tends to involve violence, which often leads to situations that are worse than they were before.

We need to agree that political associations should always be voluntary, and that most such associations worldwide right now are not. Rather, they are most often maintained via state violence, as we just witnessed in Spain. Our goal should be to live in a world defined by peaceful voluntary political associations, but getting from here to there won’t be easy or quick.

I hope I live long enough to see such a world.

If you liked this article and enjoy my work, consider becoming a monthly Patron, or visit our Support Page to show your appreciation for independent content creators.