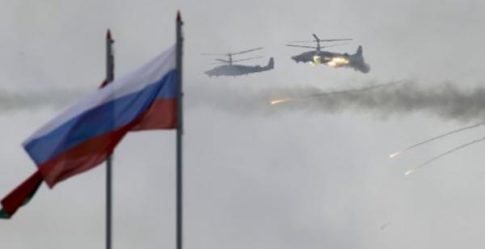 – Russia Does Not Exclude Possibility Of War With NATO:

Just days after the conclusion of Russia’s largest military exercise ever (which US military chiefs believe broke ‘observer rules’) and NATO’s massive war games, Pravda reports a recent Russian Defense Ministry report says that Russia is preparing for the possibility of a military conflict with NATO countries.

While Russia’s defense ministry said the Zapad exercises would involve 12,700 Russian and Belarusian troops, about 70 aircraft, up to 250 tanks, 200 artillery systems and 10 warships; Military.com reports that the U.S. Army’s commander in Europe says Russia broke up its Zapad war games with Belarus into parts to avoid having international monitors watch the weeklong exercises last month.

Lieutenant General Ben Hodges said Monday that the two countries deployed “way over 12,700” personnel, the limit beyond which Europe’s OSCE security organization should be allowed to send observers.

Hodges said: “My guess is that there probably were over 40,000 service members.”

He told reporters at NATO headquarters that Russia and Belarus “broke it up into all these little exercises” but that “these were all connected, because this was a whole of government effort.”

Meanwhile, what the NATO commander forgot to mention is that just days before the dreaded Russian “Zapad 2017” exercise was set to begin, NATO’s own Steadfast Pyramid 2017 military exercise kicked off in Latvia on Sunday, with 40 senior commanders from NATO states, as well as Finland and Sweden. They are expected to train how to “plan and conduct operations” amid the bloc’s buildup in the region.

Covering the duration of Russia’s drills, Steadfast Pyramid, the first part of the exercise, will last until September 15. It is reportedly “to improve the ability of top-level officers and commanders to plan and lead joint operations,” according to LETA. Steadfast Pinnacle, the next stage of the drill, will last from September 17 until September 22. Steadfast Pyramid and Steadfast Pinnacle were first held in Latvia in 2011.  British General James Everard, the NATO Deputy Supreme Allied Commander Europe, is expected to arrive in Latvia to oversee both stages of the exercise, Latvia’s Defense Ministry said, according to LETA.

Meanwhile, not much is known so far about NATO’s war games. A NATO fact sheet says Steadfast Pyramid and Steadfast Pinnacle are focused on “further developing the abilities of commanders and senior staff to plan and conduct operations through the application of operational art in decision making.”

While NATO has denied it, Moscow has repeatedly accused NATO of offensive behavior, and justifies its own defensive buildup and posture on NATO’s encroachment on Russian borders.

And with that in mind – as NATO builds its presence along Russia’s borders – Pravda reports, a recent report from the Defense Ministry of the Russian Federation about the assessment of the state of Russia’s national security in the field of maritime activities says that Russia considers a possibility of a military conflict with NATO countries.

The report indicates a number of geopolitical challenges that Russia faces today. They include a “potentially possible military conflict” with NATO countries, the complicated situation in the Azov-Black Sea region, Japan’s territorial claims to the Kuril Islands, and Norway’s plans for Spitsbergen.

Experts emphasize that “the role of the factor of force” has been increasing in international relations. “Therefore, Russia is building up its naval potential for the “strategic deterrence” of potential adversaries and as an “important factor in ensuring international stability.”

Russia will not leave all possible threats unanswered, the authors of the report summarize adding that the probability of “large-scale military actions” against Russia from the direction of sea is not too high.

But while NATO and Russian military rattle sabres at one another Russian President Vladimir Putin said, as he received diplomatic credentials from new ambassadors to Moscow, including US envoy Jon Huntsman, that Moscow wants “predictable, constructive, mutually beneficial cooperation” with Washington.

Current Russia-US bilateral relations cannot “cause satisfaction,” Putin said during an official ceremony at the Kremlin in Moscow.

“We are advocating constructive, predictable and mutually-beneficial cooperation,” the Russian leader stressed, adding that “strict adherence to the principles of equality, respect for national interests and noninterference in the internal affairs” must be the basis of the bilateral cooperation.

After the ceremony, the new chief of the US diplomatic mission vowed to work on restoring trust and strengthening bilateral cooperation between Moscow and Washington… we wonder if he will be ‘allowed’ by The Deep State. For now, it appears the direction of reconciliation is coming from Moscow as Washington (and NATO) remain steadfast in their belief that the red menace is biding its time.