Kentucky’s General Assembly will need to find an estimated $5.4 billion to fund the pension systems for state workers and school teachers in the next two-year state budget, officials told the Public Pension Oversight Board on Monday.

That amount would be a hefty funding increase and a painful squeeze for a state General Fund that — at about $20 billion over two years — also is expected to pay for education, prisons, social services and other state programs.

“We realize this challenge is in front of us. That’s obviously part of the need for us to address pension reform,” said state Sen. Joe Bowen, R-Owensboro, co-chairman of the oversight board.

In presentations on Monday, the pension oversight board was told that total employer contributions for KRS in Fiscal Years 2019 and 2020 would be an estimated $2.47 billion each year, up from $1.52 billion in the current fiscal year. Nearly $995 million of that would be owed by local governments. The remaining $1.48 billion is what the state would owe.

Of course, the $5.4 billion will do absolutely nothing to avoid an inevitable failure of Kentucky’s pension system but what the hell…

As we’ve said before, the problem is that the aggregate underfunded liability of pensions in states like Kentucky have become so incredibly large that massive increases in annual contributions, courtesy of taxpayers, can’t possibly offset liability growth and annual payouts.  All the while, the funding for these ever increasing annual contributions comes out of budgets for things like public schools even though the incremental funding has no shot of fixing a system that is hopelessly “too big to bail.” 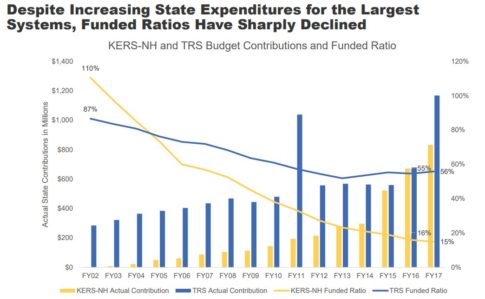 So what can Kentucky do to solve their pension crisis?  Well, as it turns out they hired a pension consultant, PFM Group, in May of last year to answer that exact question.  Unfortunately, we suspect that PFM’s conclusions, which include freezing current pension plans, slashing benefit payments for current retirees and converting future employees to a 401(k), are somewhat less than palatable for both pensioners and elected officials who depend upon votes from public employee unions in order to keep their jobs…it’s a nice little circular ref that ensures that taxpayers will always lose in the fight to fix America’s broken pension system.

Be that as it may, here is a recap of PFM’s suggestions to Kentucky’s Public Pension Oversight Board courtesy of the Lexington Herald Leader:

An independent consultant recommended sweeping changes Monday to the pension systems that cover most of Kentucky’s public workers, creating the possibility that lawmakers will cut payments to existing retirees and force most current and future hires into 401(k)-style retirement plans.

If the legislature accepts the recommendations, it would effectively end the promise of a pension check for most of Kentucky’s future state and local government workers and freeze the pension benefits of most current state and local workers. All of those workers would then be shifted to a 401(k)-style investment plan that offers defined employer contributions rather than a defined retirement benefit.

PFM also recommended increasing the retirement age to 65 for most workers.

For those already retired, the consultant recommended taking away all cost of living benefits that state and local government retirees received between 1996 and 2012, a move that could significantly reduce the monthly checks that many retirees receive. For example, a government worker who retired in 2001 or before could see their benefit rolled back by 25 percent or more, PFM calculated.

The consultant also recommended eliminating the use of unused sick days and compensatory leave to increase pension benefits.

Meanwhile, PFM warned that the typical “kick the can down the road approach” would not work in Kentucky and that current retiree benefits would have to be cut.

“This is the time to act,” said Michael Nadol of PFM. “This is not the time to craft a solution that kicks the can down the road.”

“All of the unfunded liability that the commonwealth now faces is associated with folks that are already on board or already retired,” he said. “Modifying benefits for future hires only helps you stop the hole from getting deeper, it doesn’t help you climb up and out on to more solid footing going forward.”

Of course, no amount of math and logic will ever be sufficient to convince a bunch of retired public employees that they have been sold a lie that will inevitably fail now or fail later (take your pick) if drastic measures aren’t taken in the very near future.