– Six-Figure Pensions For University Of California Teachers Surge 60% Since 2012:

In fact, the LA Times even provided this helpful chart detailing which former professors are sticking it to current students, and their parents, the most….apparently the prize goes to former UC President Mark Yudof who collects $357,000 per year after working for only 7 years in the university system. 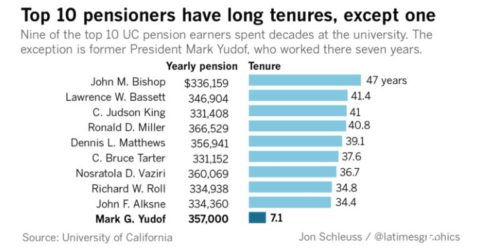 Meanwhile, if just reviewing the list above isn’t enough to make you violently ill, consider how Yudof managed to secure his $357,000 in annual payments.  To summarize, he negotiated a sweetheart deal that capped his pension payout after 7 years, he worked 5 of those years, took a “sabbatical year” for “health reasons” in year 6, and taught 1 class a semester in year 7 before retiring with a pension worth millions.

The top 10 pension recipients in 2016 include nine scholars and scientists who spent decades at the university: doctors who taught at the medical schools and treated patients at the teaching hospitals, a Nobel Prize-winning cancer researcher and a physicist who oversaw America’s nuclear weapons stockpile.

The exception is Yudof, who receives a $357,000 pension after working only seven years.

Under the standard formula — 2.5% of the highest salary times the number of years worked — Yudof’s pension would be just over $45,000 per year, according to data provided by the university.

But Yudof negotiated a separate, more lucrative retirement deal for himself when he left his job as chancellor of the University of Texas to become UC president in 2008.

“That’s the way it works in the real world,” Yudof said in a recent interview with The Times.

Yudof stepped down as president after five years, citing health reasons. Under the terms of his deal, his pension would have been $230,000. But he didn’t immediately leave the university payroll.

First, he collected his $546,000 president’s salary during a paid “sabbatical year” offered to former senior administrators so they can prepare to go back to teaching. The next year he continued to collect his salary while teaching one class per semester, bringing his tenure to seven years and securing the maximum $350,000 pension. 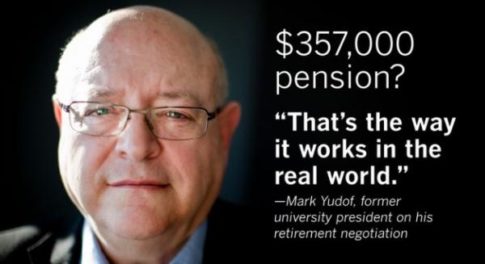