Over the past year or so, we’ve observed in amazement as one ‘institution of higher indoctrination’ (a.k.a. “university”) after another came up with replacement pronouns for politically incorrect ‘hate speech’ like ‘freshman’.  Vanderbilt even forced its teachers and administrators to wear name tags defining their pronouns just so there would be absolutely no gender confusion that might lead to a nasty “triggering” event or unnoticed “microaggression (see: Vanderbilt University Name Placards For Faculty Offices Will Now Include “Preferred Pronouns”).

Vanderbilt made nametags recently & many included a preferred pronoun section. This is real life: pic.twitter.com/LeT7BCkdmA

But, while such things are expected from our millennial youth on progressive college campuses, parents of a 5th grade class in Tallahassee, Florida were somewhat shocked when they received a letter from “Mx. (pronounced Mix)” Bressack demanding that her students only refer to her using gender neutral terms like ‘Mx.’ instead of ‘Ms.’ and “they, them, their” instead of “he, his, she, hers.”  Per the Tallahassee Democrat:

“One thing that you should know about me is that I use gender neutral terms. My prefix is Mx. (pronounced Mix). Additionally, my pronouns are “they, them, their” instead of “he, his, she, hers”. I know it takes some practice for it to feel natural, but my experience students catch on pretty quickly. We’re not going for perfection, just making an effort! Please feel free to reach out to me or administration if you have any questions. My priority is for all of my students to be comfortable in my classroom and have a space where they can be themselves while learning.” 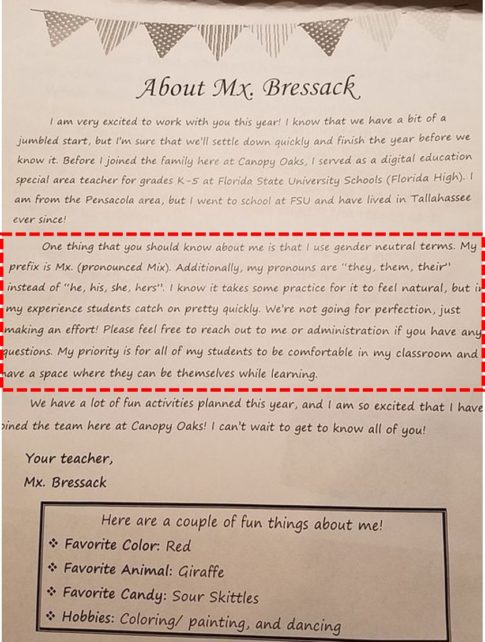 Of course, it didn’t take long for the parents of Mx. Bressack’s students to post their outrage to a Facebook group called “Tally Moms Stay Connected.” One mom bluntly asked  “is this fucking for real?” while another dad wondered whether it might makes sense to just stick to teaching math and science if your job is to be a math and science teacher. 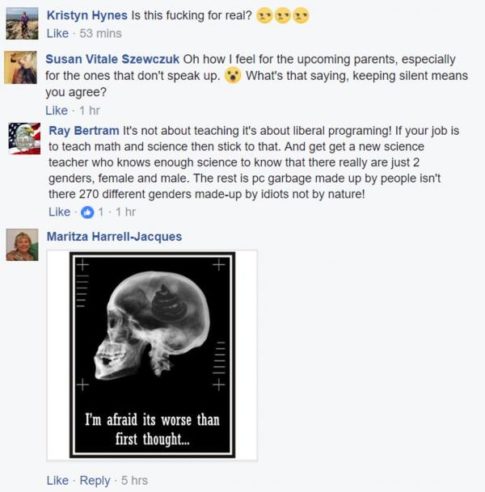 Meanwhile, principal Paul Lambert assured parents that Mx. Bressack enjoyed his full support but that “teachers in our district will not be allowed to use their influence in
the classroom to advance any personal belief or political agenda.”

“We support her preference in how she’s addressed, we certainly do,” Lambert said. “I think a lot of times it might be decided that there is an agenda there, because of her preference — I can tell you her only agenda is teaching math and science at the greatest level she can.”

Lambert acknowledged there have been some calls to the Canopy Oaks front office regarding the letter.

“There has been some (contact from concerned parents), the thing that has brought good understanding is, it’s not a preference that’s being applied to anyone other than the teacher.”

“According to Principal Lambert, the teacher addresses students daily by using the pronouns he, she, him and her.  The teacher also uses ma’am and sir when responding to students. As a personal preference, however, the teacher simply prefers to be referred to in gender neutral terms as that of a coach,” Hanna wrote.

“I can assure you that teachers in our district will not be allowed to use their influence in the classroom to advance any personal belief or political agenda. At this time, I do not believe that is the case in this instance.”

So what say you…necessary step toward forming a more perfect progressive society or just complete insanity?