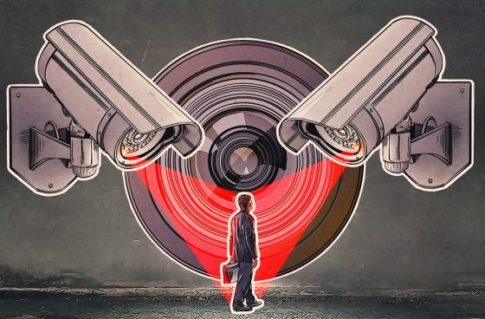 But FaceID should create fear about another form of government surveillance too. And this one is a rights violation of every person on earth: mass scans to identify individuals based on face profiles. Law enforcement is rapidly increasing their use of facial recognition; one in two American adults are already enrolled in a law enforcement facial recognition network, and at least one in four police departments has the capability to run face recognition searches. This could make Apple the target for a new mass surveillance order.

While Facebook has a powerful facial recognition system, it doesn’t maintain the operating systems that control the cameras on phones, tablets, and laptops that stare at us every day.

Apple’s new system completely changes that. For the first time, a company will have a facial recognition system with millions of profiles, and the hardware to scan and identify faces throughout the world.

According to Wired, this is a system already ripe for government abuse. The government could issue an order to Apple with a set of targets and instructions to scan iPhones, iPads, and Macs to search for specific targets based on FaceID, and then Apple would provide the government with those targets’ location based on the GPS data of devices’ that receive a match. Apple has a good record of fighting for user privacy, but there’s only so much the company could do if its objections to an order are turned down by the courts. And the government is already looking into how this could benefit them, but are hiding behind the guise of “privacy.” On Wednesday Sen. Al Franken (D-Minnesota) released a letter to Apple CEO Tim Cook, asking how the company will handle the technology’s security and privacy implications.

But this type of sleazy “Big Brother” activity by the government is not new.

Over the last decade the government has increasingly embraced this type of mass scan method. Edward Snowden’s disclosures revealed the existence of Upstream, a program under FISA Section 702 (set to expire in just a few months). With Upstream, the NSA scans all internet communications going into and out of the United States for surveillance targets’ emails, as well as IP addresses and what the agency has called cybersignatures. And last year Reuters revealed that Yahoo, in compliance with a government order, built custom software to scan hundreds of millions of email accounts for content that contained a digital signature used by surveillance targets. –Wired

Mass facial recognition scans are unconstitutional and a gross violation of human privacy rights. But that has yet to stop the overreaching government from its pursuit of an even more effective method of their goal of dystopian mass surveillance.