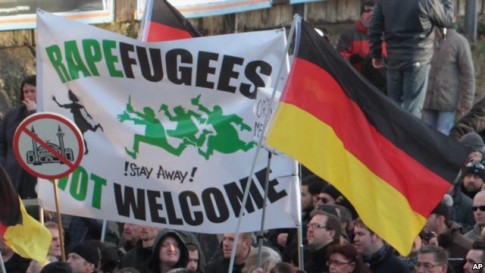 – Migrant Rape Attacks Up 91 Per Cent in Bavaria This Year:

Bavaria has seen a drastic rise in the number of rapes since 2016, with 685 cases being reported to police from January to July of this year — up 48 per cent.

Migrants accounted for 126 rapes in the same period, almost double the number of 2016, making migrants responsible for almost one in every five cases of rape, German newspaper Bild reports.

Bavarian Minister of the Interior Joachim Herrmann, a member of the Christian Social Union (CSU) — which is allied with German Chancellor Angela Merkel’s Christian Democratic Union (CDU) — said the reasons for the increase were unclear. The Interior Minister said more focus was needed on looking into the statistics, vowing to “combat sexual offences even more specifically, even in asylum accommodations”.

Two recent cases have made headlines in Bavaria, in which two women were raped in open areas. One involved a 28-year-old woman in Munich who was on her way to the Feierwerk event hall and was dragged into a park where an unknown man raped her.

The other case occurred earlier this week when a young woman was raped while out jogging the Simssee lake near Rosenheim. A 34-year-old failed asylum seeker from Nigeria was later arrested by police in connection with the attack.

Mr Hermann also called for the “effective limitation of immigration and the consequent deportation of rejected asylum seekers,” a policy shared by the CSU leader Horst Seehofer, who has repeatedly called for a limit on the number of asylum seekers coming into the country.

Seehofer’s idea has been repeatedly rejected by his coalition partner Angela Merkel, who has consistently maintained she will not limit the number of asylum seekers coming into Germany.

The Bavarian Interior Minister also noted the challenges of the upcoming Oktoberfest event, saying he would seek to increase both the police presence at the event and the number of CCTV cameras.