– JPMorgan Goes In On Bitcoin: Kolanovic Asks “Are Cryptocurrencies A Pyramid Scheme?”:

One day after Jamie Dimon slammed bitcoin, sending its price reeling after he called the cryptocurrency “fraud”, warning it “won’t end well”, and threatening to fire any JPMorgan trader caught trading bitcoin “for being stupid” (a move some dubbed diplomatic genius as JPM’s 20% guide down in trading revenues got zero mentions yesterday) JPMorgan has released its unofficial guide on bitcoin. While that was perhaps to be expected as we are confident the bank was flooded with phone calls from clients who were long the best performing asset class of the year, if not decade, what is much more surprising is who the author of said report was: none other than JPM’s notorious quant guru, Marko Kolanovic, who simply asks “are cryptocurrencies a new asset class or a pyramid scheme?”

While we know how Jamie Dimon feels, Kolanovic’s conclusion is less draconian, if mostly along the skeptical lines of his boss’ thinking: “While we don’t know whether the price of cryptocurrencies will go up or down in the near-term, the history of currencies, governments and financial fraud tells us that the future for cryptocurrencies will likely not be bright.” 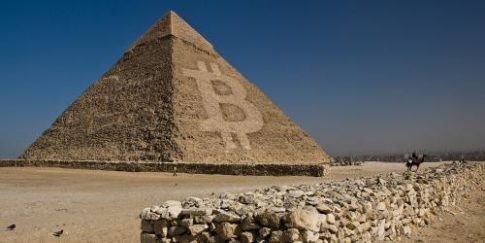 Here is the full report from JPMorgan:

Are Cryptocurrencies a New Asset Class or a Pyramid Scheme?

What are Cryptocurrencies? Recently, a number of sell-side market strategies and researchers opined on the merits of investing in Bitcoin and other cryptocurrencies. Some went as far as introducing price targets and making relative value calls on cryptocurrencies vs. other asset classes. The number of cryptocurrencies now existing is in the hundreds (~$150bn total assets), and there are dozens of cryptocurrency hedge funds launched (e.g. here). Developments arounds distributed ledgers and the concept of digital currencies are fascinating from a technological point of view. It is likely that some of these technologies will become very valuable. The supply of cryptocurrencies is not controlled by central banks, and they can be used to avoid capital controls, enable tax evasion, or fund transactions on the dark web. As such, cryptocurrencies may ideologically appeal to proponents of small government (however, a paradox is that distributed ledger technology in principle enables unprecedented centralized access to the digital records of any and every transaction).

In this note, we want to highlight the risks of cryptocurrencies. Cryptocurrencies cannot be reliably valued and they have significant ‘tail risk’ that could come in the form of a regulatory ban. Moreover, the whole cryptocurrency market exhibit some parallels to fraudulent Pyramid schemes.

Are they Currencies? Currently, there are few legitimate reasons to use cryptocurrencies apart from speculation (e.g. any transactions can be done electronically in country currencies such as USD, EUR, etc.). The claim that cryptocurrencies have lower transaction costs is inaccurate as an asset’s transaction cost is almost always driven by its volatility rather than processing fees (e.g. bitcoin volatility is ~100%, or ~15 times the average currency volatility). Valuing cryptocurrencies as traditional currency is not possible as there are no underlying ‘economy’ to assess supply/demand for its goods and services, there is no fundamentally driven inflation, there are no ‘rate differentials’, etc. Perhaps more importantly, there is no organized power behind this currency to e.g. ensure its long term viability, secure trade, enforce its convertibility into other goods and services, or provide investor fraud protection.

Are they Commodities? Of course, having a government behind a currency is not a guarantor for its survival. In fact, on a long enough timeline, all currencies that were not made of a valued  commodity such as gold or possessed exceptional artistic value and rarity became worthless. Should one look at cryptocurrencies as an alternative to Gold rather than country backed currencies? While there is no government to back up either gold or cryptocurrencies, gold has a track record of outliving governments and being use as a store of value going back to the beginning of civilization (at least ~7,000 years). Unlike gold, cryptocurrencies are not engrained in human psychology and backed up by the longest possible backtest. The claim of scarcity of cryptocurrencies via specific code implementation that limits their production is bogus as well. There is no scarcity as virtually anyone can create a new cryptocurrency, and existing algorithms can be modified (e.g. hard forks) to increase the amount of cryptocurrencies.

Can they ‘Default’? If the use of cryptocurrencies were to increase to an extent that they start competing with traditional ‘country’ currencies (e.g. start interfering with the ability of central banks to control money supply, governments to collect taxes, impose sanctions or capital controls, etc.) they would be quickly regulated or outlawed. While similar attempts were made historically on the use of precious metals, cryptocurrencies don’t have multi-millennial track record and place in human history to ensure survival. Even if the cryptocurrencies don’t threaten governments’ primacy on monetary issues, their use may be irritable enough (e.g. avoiding capital controls, evading taxes, dark web, etc.) to prompt a government crackdown. We are already seeing this with recent developments from China and this trend is more likely to continue.

Are they Pyramid Schemes? another worrying aspect of cryptocurrencies are some parallels to fraudulent pyramid schemes. Initiator of a pyramid scheme often ensures ownership of a disproportionally large share of future profits. For instance, in the case of bitcoin, it is believed that an unknown person (or persons) known as ‘Satoshi Nakamoto’, before disappearing, mined the first 1-2M coins or ~10% of the coins that will ever exist ($4-8bn USD current value).  While initial mining requires a negligible effort, the benefits for subsequent participants start diminishing. Mining becomes progressively more difficult, and eventually unprofitable, marking the likely end of a scheme. A way around this in Pyramid schemes is to bypass the original chain and start a new one of your own. The cryptocurrency analogy would be to start a new coin if it is more profitable than mining the existing one. This can work as long as there are enough willing and uninformed buyers.