As one prominent columnist put it, “Ole Miss Goes Bananas” – we truly wish this was merely an over the top parody featured in The Onion, but unfortunately the triggered victims’ tears are all to real. The Daily Mississippian broke the story this week, which quickly went viral:

This weekend, leaders from Ole Miss Greek life convened upon Camp Hopewell in Lafayette County for a three-day retreat designed to build leaders and bring campus closer together. The retreat was cut short Saturday night, however, after three black students found a banana peel in a tree in front of one of the camp’s cabins.

The students shared what they found with National Pan-Hellenic Council leaders, sparking a day’s worth of camp-wide conversation surrounding symbolism, intended or not. In the midst of the open and sometimes heated discussion, senior accounting major Ryan Swanson said he put the banana peel in the tree when he could not find a trashcan nearby. 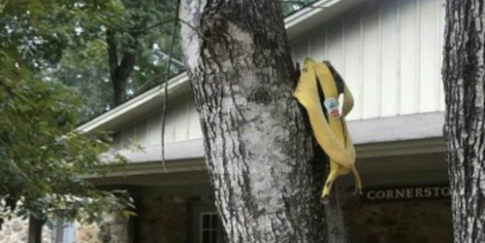 The offending fruit peel in question.

That’s right, a random discarded fruit peel ultimately led to the cancellation of an entire weekend event “designed to build leaders” which instead ended in “tears and frustration” as organizers “didn’t feel safe”. And then of course came the inevitable university action plans, flurry of letters exchanged, and sensitivity meetings. Bleary-eyed and shaken students had to text friends and family to come pick them up early (sounds like Kindergarten carpool pick-up time). The Daily Mississippian continues:

Alexa Lee Arndt, interim director of Fraternity and Sorority Life, said she was one of the only university staff members acting in an administrative capacity at the weekend retreat. Monday afternoon, she sent a letter to all campus chapter presidents, council officers and chapter advisers, confirming the incident and outlining the university’s plans.

“To be clear, many members of our community were hurt, frightened, and upset by what occurred at IMPACT … Because of the underlying reality many students of color endure on a daily basis, the conversation manifested into a larger conversation about race relations today at the University of Mississippi,” Arndt wrote in the letter acquired by The DM.

…Katrina Caldwell, vice chancellor for diversity and community engagement, said her office was asked to put a plan together to handle the weekend’s incident on campus.

As the story went national by the end of week, and with the original Daily Mississippian report garnering 100,000 views, one event organizer accused the media of racism, writing that she “understood the potential pitfalls of allowing white journalists to write our story.” Perhaps this is the one good thing about this story: columnists generally laughed at the ordeal, and some national media headlines which attempted to frame the story objectively still came off sounding like parodies – all of which naturally led to further triggering at Ole Miss. Take for instance The Washington Times story, titled University of Mississippi event cut short over discarded banana peel. Nothing really more needs to be said beyond this succinct (and elegantly absurd) headline, yet the effected students persist in their demands to be taken seriously.

Makala McNeil, the student who blamed “white journalists” for wrongly framing the story, subsequently wrote an editorial which provided emotional play-by-play recounting the moment the discarded banana peel was noticed:

As we approached the cabin, she abruptly stopped. Her eyes widened. Her jaw dropped. She frantically pointed at a tree, exclaiming, “Look! Look! In the tree!” It was a banana, dangling from a limb.

My heart dropped instantly. I began to scan the area around us to see if we were in any immediate harm. Once we realized we were alone, questions started flying: “Was this here this morning?” “There’s no coincidence that this happened right after we just got done talking about race, right?”

But McNeil goes on to acknowledge the central question at the heart of the entire non-event while still defending her right to be triggered: could it really be that a student merely threw out a banana peel after innocently consuming the banana? She writes:

Regardless whether last weekend’s incident was an honest mistake or a malicious threat, our response as black Greeks at the University of Mississippi was valid and authentic, especially given the present state of race relations in our country and at our university.

Apparently eating bananas can now only be classified as an “honest mistake” or “malicious threat“. Senior Ryan Swanson confessed to having discarded the peel after the “triggered” students asked who did it in a group session before the event was canceled. Swanson said he simply didn’t see a trashcan and flung the peel into the tree. He issued a lengthy apology. But we do sincerely hope for his sake the snowflake mob at Ole Miss doesn’t now try to ruin his life.

“So let me get this straight. Three black students freaked out because they saw a banana peel in a tree while at a mixed-race fraternity-sorority retreat. The entire retreat ground to a halt so everybody could sit around and emote about the banana peel. A frat boy confessed that he had tossed the peel into the tree because he couldn’t find a trash can — then he promptly abased himself for having committed an offense against racial correctness. The freakout got even freakier, with some black students saying they didn’t feel “safe”. Because of a banana peel. Then the entire retreat was cancelled, and now it’s going to be a campus-wide Thing at Ole Miss. Over a banana peel a frat boy threw into a tree because he couldn’t find a trash can.“

It now seems mass triggering events are a weekly phenomenon on college campuses. Will even “the case of the discarded banana peel” be matched for its absurdity? No doubt, more will come as campus education and culture continues its tailspin into the abyss of social justice warrior mass meltdown panic and accompanying absurdism. Dear parents, how’s this for a $40K a year education?