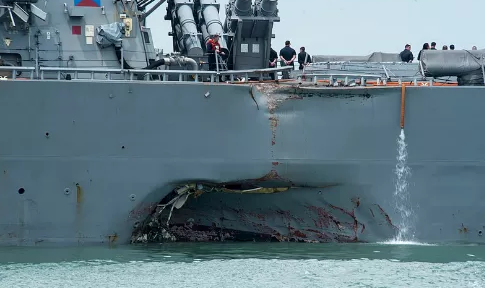 – Chief Of Naval Operations “Looking Into” Possibility Ships Were Hacked:

Tragedy struck the USS John S. McCain on Monday, when the destroyer collided with a merchant ship off the coast of Singapore, leaving 10 sailors missing and five injured. The US Navy is still struggling to find all of the remains of the missing sailors, and has ordered an operational pause for all naval fleets around the world as investigators try to figure out exactly why this terrible accident occurred.

Among the possible causes that are being looked into, one has a raised a few eyebrows. Over the summer there have been two accidental collisions involving the 7th fleet, and a total of 4 similar incidents this year. This has led some Navy officials to suspect that a cyber attack may have been responsible for the crash, as well as other recent Naval accidents.

The Navy has not ruled out an intentional action behind the latest deadly collision between a Navy destroyer and a merchant ship, the chief of naval operations told reporters Monday.

“That’s is certainly something we are giving full consideration to but we have no indication that that’s the case—yet,” Adm. John Richardson, the CNO, said at the Pentagon.

“But we’re looking at every possibility, so we’re not leaving anything to chance,” he said.

Asked if that includes the possibility the electronic defenses on the guided missile destroyer USS John S. McCain were hacked in a cyber attack, Richardson said investigators will look into all possible causes.

“We’ll take a look at all of that, as we did with the Fitzgerald,” the four-star admiral said, referring to another Navy warship collision with a merchant ship in June near Japan.

So far the Navy has made it clear that there currently isn’t any evidence that the neither USS McCain, nor any other naval vessel, has suffered from a cyber attack. However, there are quite a few top notch cyber security experts who think that all of these collisions probably have something in common.

“There’s something more than just human error going on because there would have been a lot of humans to be checks and balances,” Jeff Stutzman, an ex-information warfare specialist in the Navy, who now works at a cyber threat intelligence company, told McClatchyDC.

“When you are going through the Strait of Malacca, you can’t tell me that a Navy destroyer doesn’t have a full navigation team going with full lookouts on every wing and extra people on radar,” he said.

Itay Glick, the founder of cyber security firm Votiro, told news.com.au that the possibility of cyber interference was the first thing that came to his mind when he heard about the incident.

“I don’t believe in coincidence,” Glick told the website.

“Both USS McCain and USS Fitzgerald were part of the 7th Fleet, there is a relationship between these two events and there may be a connection,” he added.

The only other question that remains is, if these collisions were caused by cyber attacks, who is responsible? One likely culprit seems to be China. For years the Chinese government has complained about the US Navy’s presence in the South China Sea, which they claim as their territorial waters. In fact, following the USS McCain’s accident, the Global Times, which is effectively a mouthpiece of the government, claimed that Chinese citizens were celebrating the collision.

It’s also important to consider the fact that many US Naval vessels are riddled with counterfeit parts from China. A Senate led investigation in 2012 found that our ships contained over a million counterfeit parts, mostly of Chinese origin. Obviously, this raises the possibility that the Chinese government may have used black markets to secretly funnel parts to the US Navy, which contain backdoors that are easily exploitable.

But perhaps what’s most telling, is how a state-run Chinese media outlet responded to the USS McCain collision, by suggesting that the US Navy has become a dangerous presence for commercial shipping in the South China Sea.

BEIJING (Reuters) – The U.S. navy’s latest collision at sea, the fourth in its Pacific fleet this year, shows it is becoming an increasing risk to shipping in Asia despite its claims of helping to protect freedom of navigation, an official Chinese newspaper said…

…The state-run China Daily said in an editorial on Tuesday that people will wonder why such a sophisticated navy keeps having these problems.

“The investigations into the latest collision will take time to reach their conclusions, but there is no denying the fact that the increased activities by U.S. warships in Asia-Pacific since Washington initiated its rebalancing to the region are making them a growing risk to commercial shipping,” it said.

There’s no proof that China has been hacking our ships, but the possibility can’t be ruled out.