Hope you all remember what I’ve said about Turkey.

Looks like more pre-WW3 signs are about to be getting fulfilled.

– ‘Germany in three days and France in one hour’ Shock threat to EU from Erdogan backers:

WARMONGERING rhetoric is being spewed by Turkey towards Europe after a newspaper close to the Turkish regime declared the country could overrun Germany in three days.

Newspaper Yeni Söz, closely aligned to the government, made the outlandish claim on the front page of its daily newspaper.

Carrying the provocative headline “Turkey can occupy Europe within 3 days”, the move is the latest in a political spat between Ankara and Berlin.

Turkey has been vying to join the EU for more than a decade, with official negotiants to become a member dragging into their 12th year.

President Recep Tayyip Erdogan attempted to use the migrant crisis as a bargaining chip, striking a deal with Brussels over the crisis in exchange for political sweeteners, which included kick-starting their membership bid.

But relations have turned sour with the EU, in particular Germany, and the two countries have been engaged in a public spat over the past few months.

The paper’s absurd claims appear to be a no more than a childish dig at Berlin, as it is a feat unlikely to be achieved.

Despite the outlandish statement, the paper attempts to back up its declaration by building their theory on a thesis of the American political scientist George Friedman, founder of the geopolitics institute Stratfor.

The paper said: “Friedman said the Turks could defeat Germany in one afternoon and France in one hour, if they have the courage to fight.

“If you believe the international research institute Gallup, that asked people if they would fight for their country, then the Europeans have already taken out the white flags in the event of a war.

“Germany is abandoned by its citizens. If we start in the morning, we can have our evening prayer in Bellevue Castle.”

Just make sure you have enough transport capability, when ‘returning’ back home… 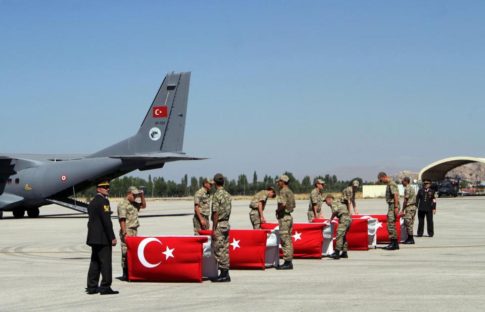